his can be one of the most dangerous stretches on the race when the wind blows or a storm hits. It can make or break champions, not to mention back- of-the-packers. Mushers have nearly died within what would normally be a few hours’ easy running to Nome. In reasonable weather, this is a pleasant five- to eight-hour run; in the worst conditions, it can be impassable.The race uses the main snowmachine trail to Nome. It is well marked at the beginning of the race, but inevitably many markers are knocked over or blown down. Some parts have been permanently marked. Markers are absolutely critical for this leg because visibility can be near zero in storms and ground blizzards.

The trail leaves White Mountain on the Fish River for about three miles, and then leaves the river to cut overland to the southwest, crossing low, rolling tundra and several streams before reaching the Klokerblok River. It runs up the river and across some low ridges, and then crosses into the drainage of the Topkok River.

The trail then turns west and climbs over a series of barren ridges to a 400-foot saddle just northwest of Topkok Head, overlooking the coast. It then descends sharply to the beach, reaching the Nome Kennel Club shelter cabin at the foot of the hill, 30 miles from White Mountain.

For the next 12 miles the trail runs along or just behind the dune line and the “driftwood line” on the shore. This stretch is wide open and is subject to winds of more than 80 miles an hour from the north, as well as blinding whiteouts. The trail will join the Nome-to-Council road (not plowed in the winter) at the Bonanza Ferry bridge and then follow it for the last 12 miles to Safety.

On the way to Safety 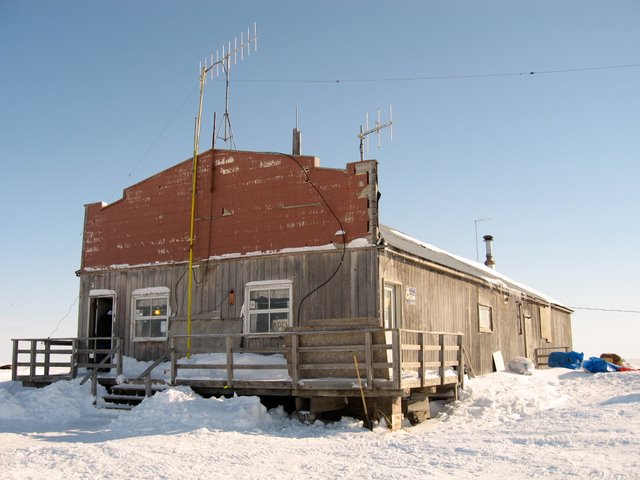