The 2011 Musher Drawing was held last night in Anchorage. The 2011 Start will have a lot to do about Bethel!! 2011 Junior Iditarod Winner Jeremiah will lead the mushers out of the Ceremonial Start in Anchorage tomorrow morning. The next musher out of the chute will be former Bethel musher Dee Dee Jonrowe.

Pete drew bib number 54 so he will have a bit of time to wait before heading out of the gate.

The ceremonial start begins tomorrow at 10:00am in Downtown Anchorage.

We will start our coverage from there! If you have photos and are in town. Send them my way!!

In case you missed it! A few Team Kaiser dogs contributed to the victory! Congratulations to Jeremiah from Team Kaiser!

From Tundra Drums:
Bethel’s Jeremiah Klejka wins Junior Iditarod
Bethel Regional High School junior Jeremiah Klejka drove his dogs to victory on Sunday at the 150-mile Junior Iditarod sled dog race.
The 17-year-old finished nearly a half hour ahead of runnerup, Anitra Winkler from Cantwell.
The prestigous race is for mushers between the ages of 14 and 17 years old.
Klejka ran the course from Knik Lake to Willow Lake in 1 day, 11 hours and 46 minutes, crossing the finish line at 11:46 a.m.
This is Klejka’s third Junior Iditarod and builds on a family legacy for the event – Klejka’s sister Jessica won the Junior Iditarod in 2008.
Emily Krol, 17, from Wasilla came in third at 12:34 p.m., 22 minutes behind Winkler.
The victory gave Klejka back-to-back top five finishes.
He finished fourth last year after coming home ninth as a rookie in 2009.
The Junior Iditarod began in 1978 and has a rich history, featuring some of the best young talent from the finest mushing families in Alaska.

There are two winners in the Guess Pete’s Time to Nome contest: 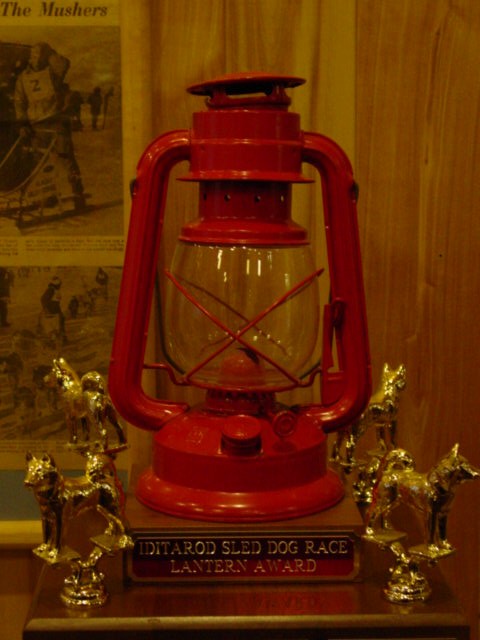 The Last Musher On The Trail Has Arrived…

In Nome Alaska! Thirty Seven Year Old Celeste Davis, from Deer Lodge Montana, is the last musher to make it under the Burled Arch on Front Street in Nome. Her arrival signifies the end of the 2010 Iditarod Trail Sled Dog Race. Davis arrived in Nome at 8:06 pm with 9 dogs on her team. She will also go into the Iditarod history books as the fastest “Red Lantern” arriving in Nome in 13 days, 5 hours, 6 minutes, and 40 seconds.

The Story of the Widow’s Lamp

During the days of Alaska sled dog freighting and mail carrying, dog drivers relied on a series of roadhouses between their village destinations. Since these mushers ventured out in most all kinds of weather, for safety reasons they found the idea that pilots rely on, known today as the flight plan. Word was relayed ahead that a musher and team were on the trail, and a kerosene lamp was lit and hung outside the roadhouse. It not only helped the dog driver find his destination at night, but more importantly, it signified that a team or teams were somewhere out on the trail. The lamp was not extinguished until the musher safely reached his destination.

In keeping with that tradition, the Iditarod Trail Committee will light a “Widow’s Lamp” at 10:00 a.m., on the first Sunday in March, in Nome at the trail’s end. This lamp, which will be attached to the Burled Arch, our official finish line, will remain lit as long as there are mushers on the trail competing in the race. When the last musher crosses the finish line, officials will extinguish the “Widow’s Lamp” signifying the official end of the Iditarod for that year.

All too often, public and media think of the race as being over when the winner crosses the finish line, yet there are still teams on the trail. We hope you will find this often overlooked part of the race worthy of your attention. There are many very good stories about these other mushers on the trail.

History of the Red Lantern

Often the “Red Lantern” is confused with the “Widow’s Lamp.” They are not the same. An article several years ago in Alaska magazine states that the first red lantern was awarded in the 1953 Fur Rendezvous Race. According to Alaska,

“Awarding a red lantern for the last place finisher in a sled dog race has become an Alaskan tradition. It started as a joke and has become a symbol of stick-to-itiveness in the mushing world.”