It finally made it to YouTube! Worth watching this ride and slide down the Dalzelle Gorge with Jeff King! Hold on Tight! You are in for a RIDE!!

The tracker shows Jenn and Lewis within a couple of hundred yards. They are just coming up on the Gweek cutoff and the bluffs. Come on down and cheer on Team Kaiser!

Here is the Saturday Morning KYUK Report from Kalskag. It sounds like a perfect day for mushing. No wind and just above zero. Teams are resting and will be out on the trail in a couple of hours. Times will be adjusted during the Kalskag layover so Pete arrived in 11th and will leave in 9th place. It is a very close race with the pack made up of the best teams in Mushing. Buser, Mackey, Baker, Kaiser, Redington, Williams– That’s why they come here! The best teams run the K300!

Good Morning Race Fans! Today will be bound to be an exciting day in Dog Mushing. Pete and the team are resting in Kalskag. They arrived at 5:01am in 11th place. After a 6 hour layover, the teams will be able to head out on the trail.

The front runners were into Kalskag about 45 minutes ahead of Team Kaiser. Rohn Buser was first into Kalskag at 4:16am followed closely by Lance Mackey at 4:18am. I’ll be trying to get some news from Kalskag to see how it’s going with a personal touch.

In Bogus Creek 150 News, Team Kaiser Jenn and the team are through Akiak. Jenn was first into the Bogus Creek Checkpoint 11:52pm just 8 minutes before Jeremiah Klejka. Presently Tuluksak phones are down, so the K300 doesn’t have any info yet. Akiak is 30 miles up the trail from the Finish. This would put a finish between 10:30 and 11:30am. Teams are traveling about 2 hours behind last year’s times. For some reason K300 isn’t tracking Akiak times, so cannot make too much of a forecast until we see her into Kwethluk. Jenn has been leading the race for much of the time, but is followed closely by musher Lewis Pavilla. It’s going to be a battle for sure!

GPS is a bit sporadic (Anyone own a Spot?- Kind of par for the course- Still an awesome little device) Pete is out of Tuluksak. No official times.

Jenn and several other Mushers are bed down at Bogus Creek. Bogus Mushers are allowed to have “Pit Crews” that bring up supplies etc for the teams at the checkpoint. Former Bethelite Chris Pike made his way all the way up to be on the support team from is Master’s Courses in North Carolina. Thanks Chris!!

I’m out for the evening. Back online in the Morning and then to the Bogus Finish for photos!

Northern Air Cargo donates a 4 wheeler each year for a mushers drawing. The way it worked was as each musher went up to the podium, they picked a key from a jar. Only one of the keys in the jar would actually start the machine. Pete looked at the remaining keys and surmised the situation. Hmmm… One of those keys is not like the others…. Hmmm…. So he picked a key and lo and behold, it started!! Just in time, Janet told me, as the one in the dog yard is completely shot!! Congratulations and Thanks Northern Air Cargo!! 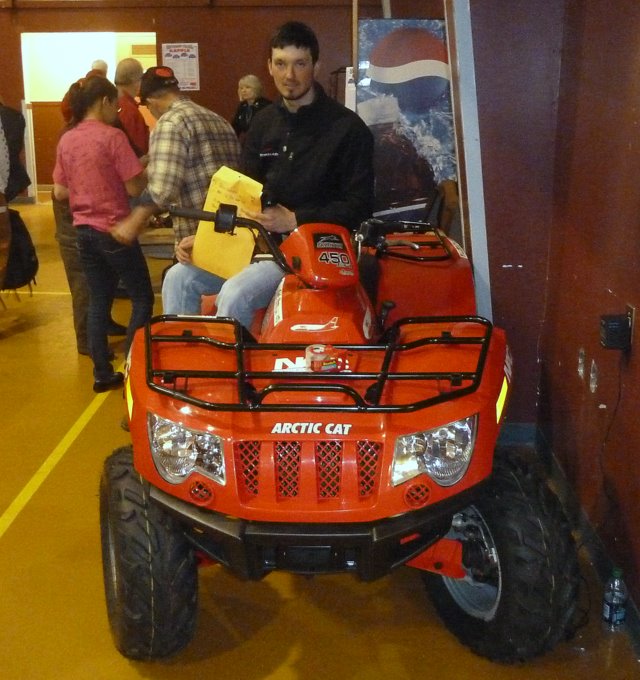