An afternoon visit to Kaiser Racing Kennel found Pete relaxed and making last minute preparations. Dog Sled Mushing is a family affair and the compound was bustling with relatives and friends hurrying here and there. I got a quick interview which I’ll post later, but wanted to put up a few photos from the visit. Ray “Gonders” Hoffman and Pete’s Dad, Ron, were on hand to give advice when needed, but mostly to just hang out with our favorite musher before he and the Team make their way out on the trail. Bethany was there as well getting all of his goodies ready, but nowhere to be found was little Ari, who already is missing his Daddy for the next two days or so.

Here are the photos! See ya down there shortly!

One of the jolliest guys I know, and gracious to the end. I’m sure he was hoping for a better finish, but in the end, he pulled off a pretty good feat– He made it around with healthy dogs, He didn’t get hurt, and he got in some great training for the B-Team. The Team looked great as they crossed the line, they’ll just need a bit more training to get on the Varsity squad.

Here are Ron’s photos- Congratulations on a job well done! 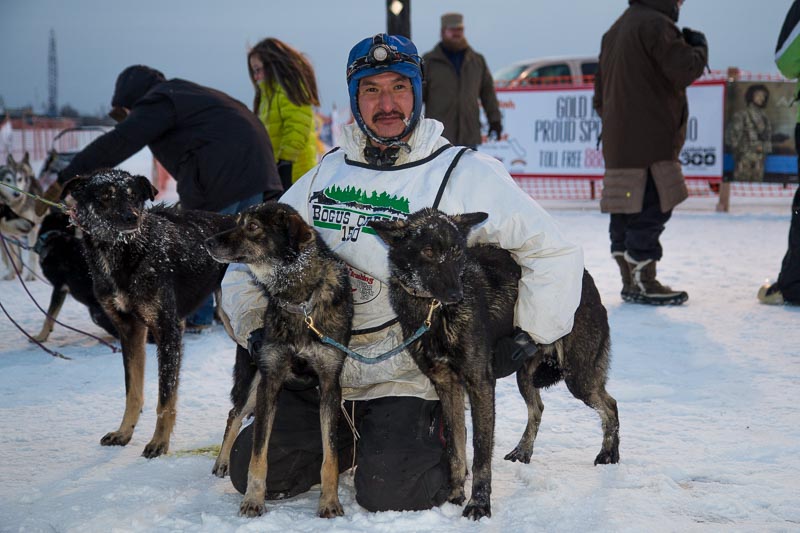 What a race! It’s not for the money. It’s for the crown and year after year they come to claim it. This year Jackie had the best team, but next year you can be sure that we will see similar faces to battle it out for the glory!

Here are some photos from the finish: 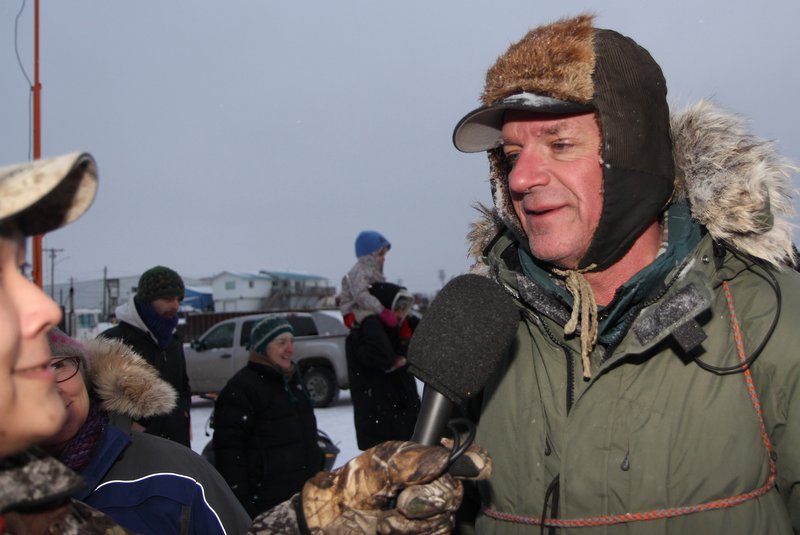 Just back from the Bogus 15o Finish Line where we saw Ron and his Team cross the line in 4th Place. He was in good spirits and the dogs, as always, looked great. We will have photos shortly.

While all the activity was taking place in Bethel, Pete was on the K300 Trail. He was into Aniak at 11:07 this morning and as expected, used the checkpoint to break his dogs and an hour of layover clock. This is Game On time and no seconds are wasted. Presently Pete and the Team are 10 miles out of Aniak on the way back to Kalskag.

I spoke with Ron before the race about being on the runners after several years.

Ron and the B Team are in a solid 4th position following the shootout going on at the front of the pack. He should be into Bogus Creek about 15 minutes before Midnight. Waiting for him will be some Pizza, a warm vehicle to rest and take a short nap for the 4 hour layover into the early morning.

Jenn Peeks and Lucas Salzbrun drove up after Ron left and have things well in hand for a good break. Kathy and Rick Hanson also may have driven up, so there will be tales to tell I’m sure. Traditionally, the trail is good enough for the Pit Crew’s to setup tents and have a good fire going in the trees near Bogus. This year, however, with the lack of snow, Teams will be waiting out the layover on the ice of the River. I spoke to Jenn before they went up and they weren’t sure if they would do the Tent thing as the truck might be easier and just as nice.

John George and Lewis Pavilla arrived into Bogus just before 11pm making the trip in under 6 hours, Right behind a virtual tie was Jackie Larson, just a few minutes behind.

Finish calculations with 10 hours in front of them, would put a winner across the Finish Line in Bethel between 9 and 10 in the morning. That would be a bit optimistic, but very doable with this fast trail. Ron and his Team are about 20-40 minutes behind them, so figure the same differential at the finish.

The shootout at the Front of the Pack is pitting the best of the best in terms of this race, against each other. It’s not for the money, it’s definitely for bragging rights. You can bet these guys will be kicking for all their worth on the way back. Napaskiak, Akiachak, and Kwethluk – This is just like Village Basketball, but out on the dogsled trail! Very exciting!! Anything can happen and it’s just like Christmas morning, only the trail will be the present we all open tomorrow morning with a new Bogus Creek 150 Champion! Stay tuned!