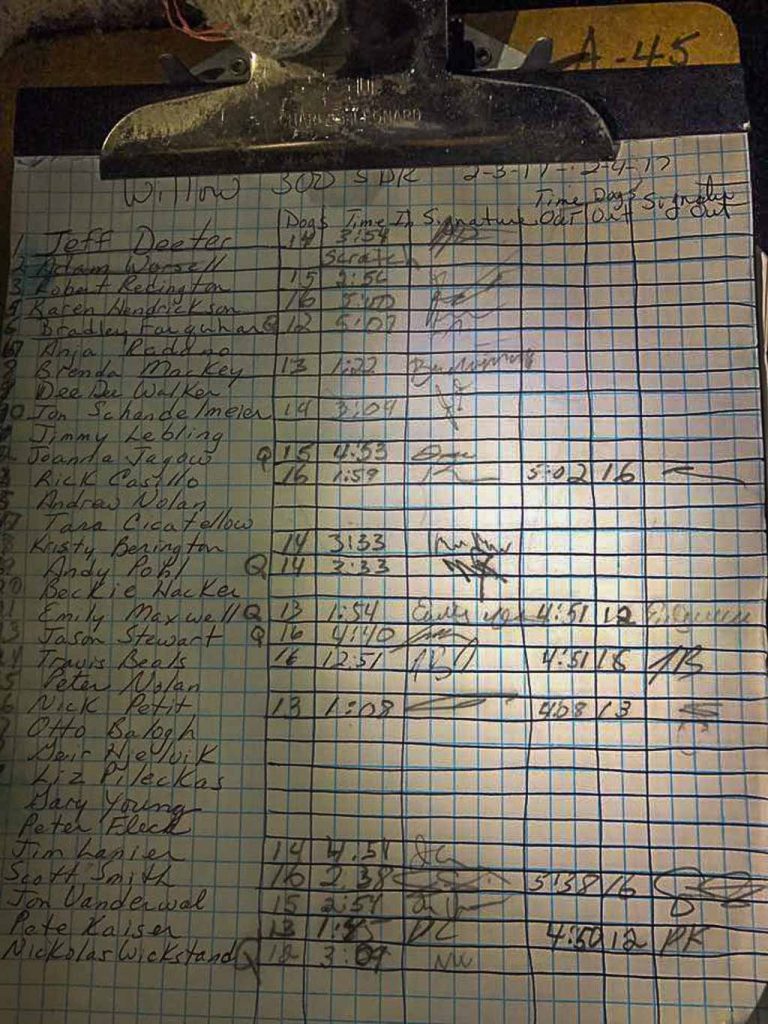 This morning has Pete about 7 miles out of Talvista and Nik about 20 miles or about 2-3 hours behind him. Teams are headed to the Talvista Lodge, the halfway point in the race. When we were sitting having a burger with Nik and Pete last night, Ray Redington Jr. was at a nearby table. “You need sheep feet to get up there, but the trail’s good,” he said. Looking at the Race Flow, you can see what he means– The first two teams slowed dramatically indicating a pretty steep trail for the last couple of miles into the checkpoint.

Willow 300 has posted the Checker’s sheet from Yentna. I converted it to a table so we could see it. We don’t have accumulated rest, so it’s a bit tough to see where musher’s are at. I believe that Travis Beals may have taken 1 hour less rest in Knik, as he left before Nicolas Petit last night, but Nicolas had arrived first.

Weather is really nice for mushing. It has been close or just below zero over night and a clear day will bring temperatures into the 20’s today. Maybe a bit warm, but definitely a good thing as the trail markers aren’t reflective. 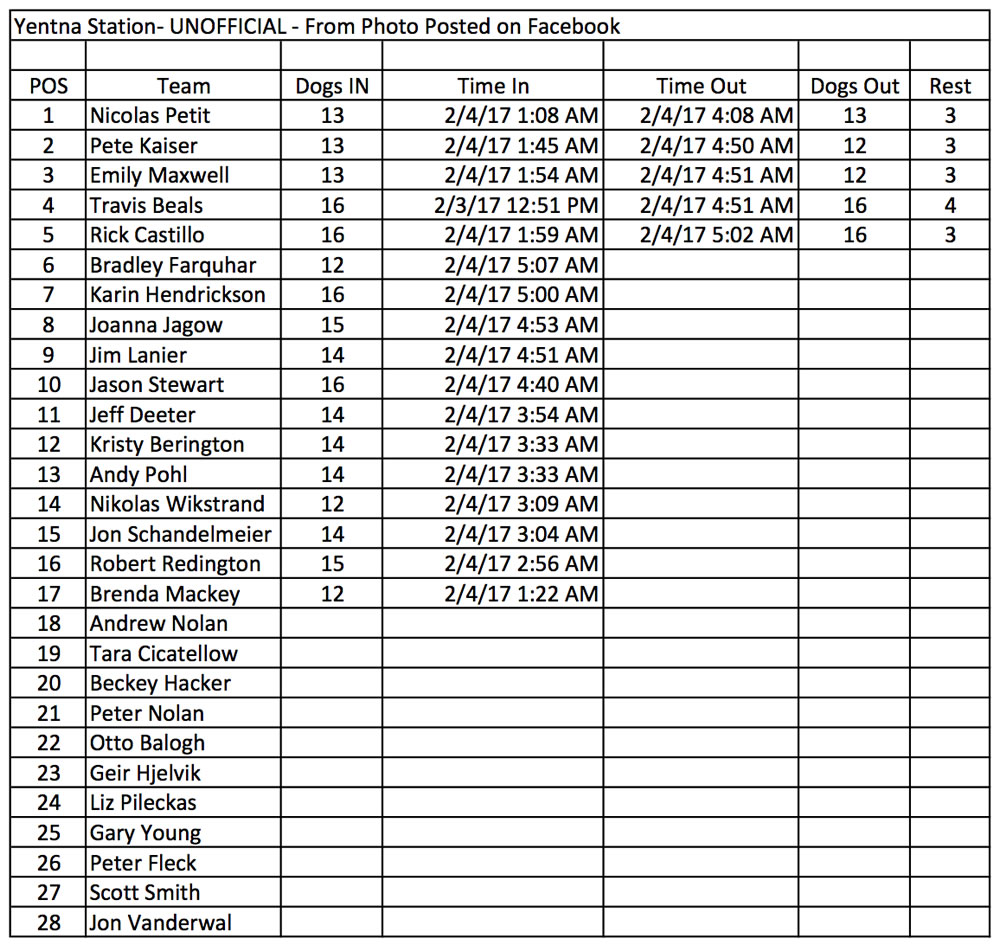 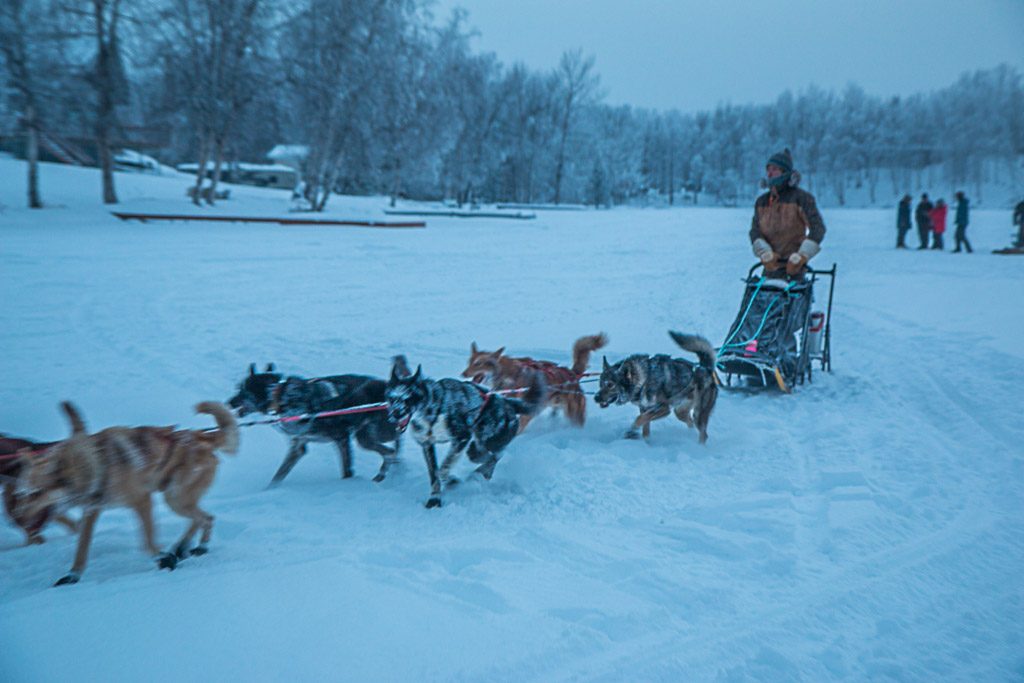 We love this guy! I’ll just say it– His relaxed way and kind dog care has really made us his fans! He fits in just perfectly with the Kaiser program.

About 30 minutes behind Pete and the Team, Niklas Wikstrand arrived into the Knik Checkpoint, just before dark.

The Willow 300 is really a different sort of race in many ways, but one big difference is in what each musher can do and what help they can have during the race. Niklas is using the Willow 300 as an Iditarod qualifying race, so he cannot have any help at checkpoints. Pete, since he isn’t using the race as a qualifier, can have help at the checkpoints.

Unfortunately for Nik and some of the other later arriving mushers, the facilities ran out of hot water just after the first Teams arrived, so he had to heat his water to cook his dog food. In his quite, calm way, though, it didn’t bother him a bit and he completed his chores in short order and it was off to the restuarant for his own large order of a Cheeseburger and fries.

After Pete and the Team were off on the trail, Nik began to ready his Team as well. I teased him and asked him if he was teaching his Team Norwegian- “Yah” was his answer, “they seem to understand me.” As I listened as he bootied the Team, indeed he was speaking to them in Norwegian. As Nik gently worked with the dogs and speaking to them, the Team was definitely responding. I then teased Ron, “Hey- We’ve got a bilingual Team now” We all chuckled, but I for one think Nik has something here…

As his 3 hour break came to an end, Team Kaiser sprang into barks and howls, lunging at the gangline- Ready to Go. Nik grabbed the hook, signed out with the Checker and off the made onto the trail. 65 miles to go until the next Checkpoint. 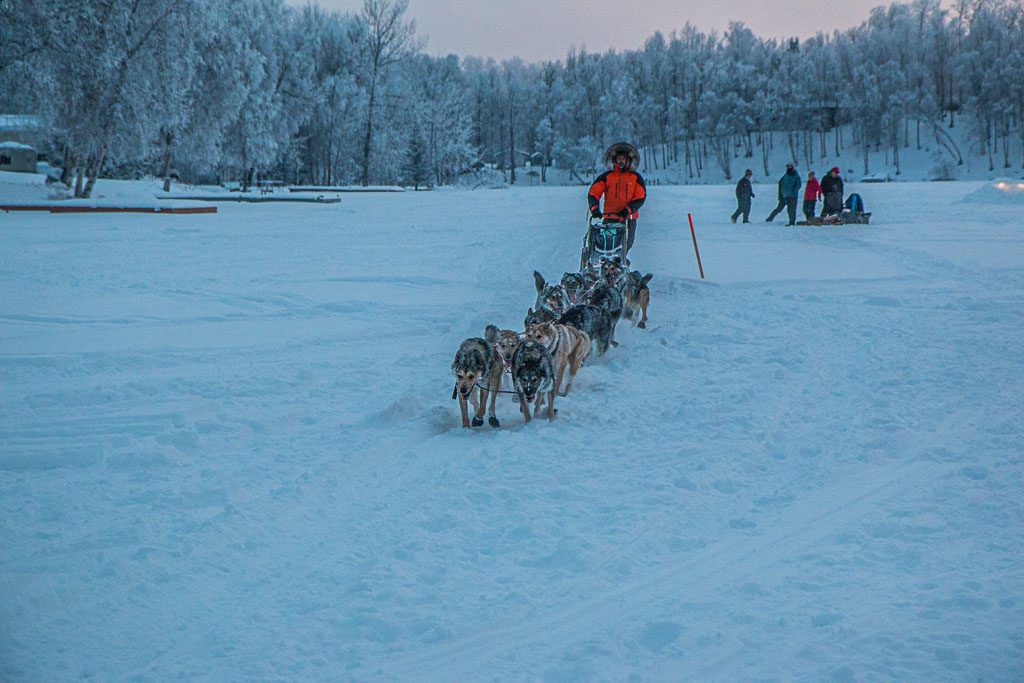 It’s something that we don’t get to do very often here at Kaiser Central– See Pete and the Team at a Checkpoint in a race. 50 miles down the trail of the 2017 Willow 300 lies the checkpoint of Knik. Placed on a small lake near Knik Bar and Grill, the secluded little lake was alive this evening with the howls and sounds of hundreds of dogs, support crews, and mushers.

As the sun set into the fog of the Matanuska Valley, Pete and Team Kaiser arrived into Knik 17 minutes behind the leader, Nicolas Petit. It was a beautiful evening in the crisp still air. Just perfect for mushing.

Generally Pete and the Team leave off into the wilderness leaving all of us behind until the finish line appears. In this race, support crews are mandatory in a couple of checkpoints to clean up straw and other presents left behind.

After the Team was bedded down and snacked, it was a pleasant break for Pete as we all gathered in the restuarant for Alaska sized hamburgers from the Knik Bar and Grill. Being it was a Friday night, the place was packed and festive to celebrate the event.

In this race, mushers are mandated to take 18 hours of break. Knik is 50 miles into the 300 mile race (think Tuluksak if this was the K300). But many teams were taking 3 and even 4 hour breaks before heading back onto the trail. I’m sure the Team was wondering what was going on with a 3 hour break after such a short time, but not a one complained and fell fast asleep on their beds of straw.

After his monster-sized hamburger and fries, Pete made his way out to the Team, bootied them up, and with a “Ready- Let’s Go!” – They were off into the darkness. It was just a fun time with Pete and the Team. Highly Recommended! Here are Pete’s Photos!

A mass start into the wilds of Matanuska Valley took place at noon today. Pete and Nik and two Teams from the Kaiser Kennel were joined by a jovial pit crew in Willow to send them off in grand style.

While this reporter was stuck in a dentist’s chair to relieve a bit of tooth pain, Ron took the helm of Kaiser Media and has sent the following photos. He as joined by Sterling Rearden, Pat Glasheen, “the taller Salzbrun brother” Tony Cotton, Donna Shantz, Paul Thurmond, and Rick Hanson.

Apparently it was a crowded Start Line with not enough room for all of the mushers, so they left in basically two “waves” with some mushers at the Start Line and others in the Parking Lot.

Mushers are at this hour headed to the Knik Bar, the first checkpoint where we hope to see both Nik and Pete do a short break.

Team Kaiser is ready for the Willow 300. Pete and Nik will be running the inaugural Race tomorrow in Willow. If you are in the area, head to the Willow Lake (Same place as Iditarod Restart)

Just spoke with Ron and both he and Rick will be the pit crew for this interesting 300 mile race. Calling all Anchorage Team Kaiser Fans for a great weekend of Racing!

We will keep you posted, but for now, check out the Willow 300 Facebook! 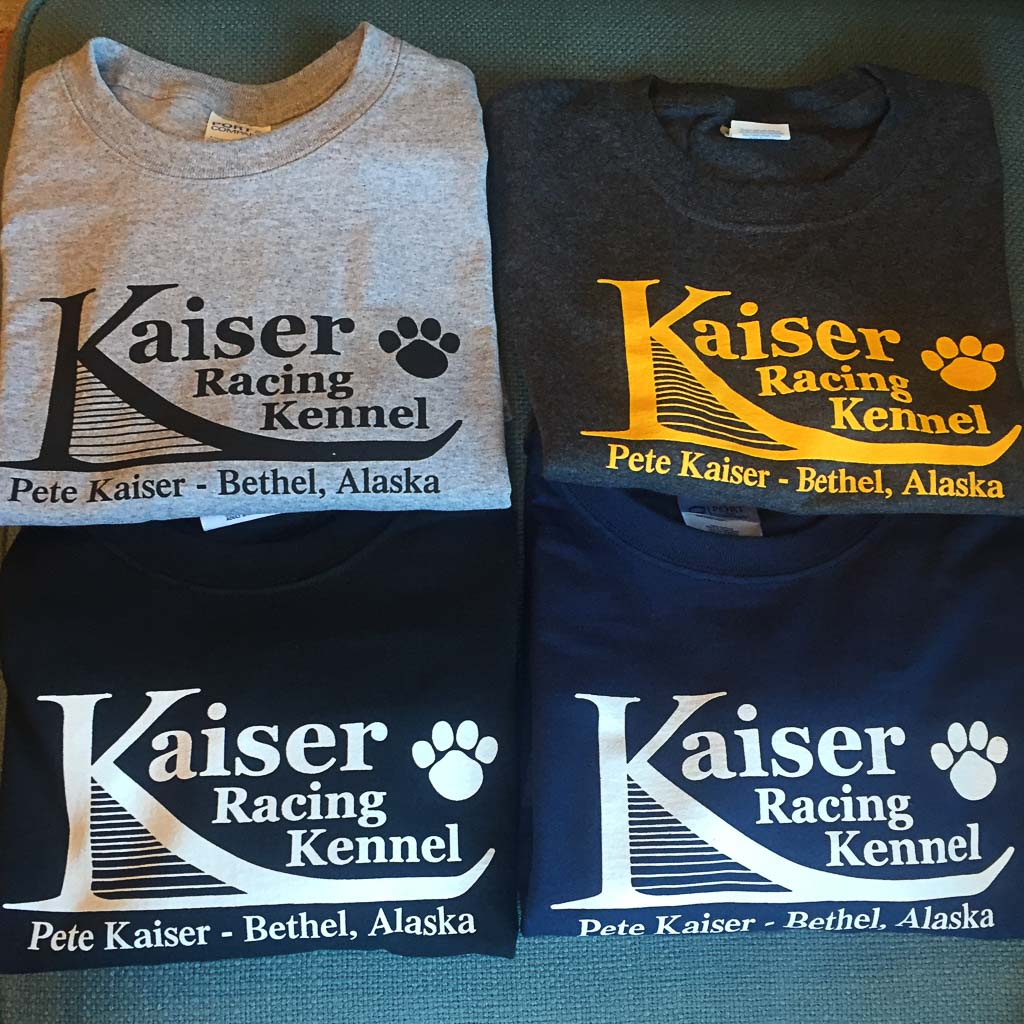 Get them while you can! Supplies Limited!

Howdy Kaiser Race Fans! Here at Kaiser Central we are excited to announce our 2017 Kaiser Racing Gear order has ARRIVED! Show your support for Pete and the Team with some great gear that we know you will love.

While Pete and the Team are busily getting ready for the Iditarod, Mrs. Kaiser and little Ari have been organizing the huge boxes of goodies!

We have Hoodies, T-Shirts, Ball Caps, Winter (Beanie) Hats, and even a few items for the Kids!

So how can you get your hands on this gear before it runs out?

Thanks to all of our great fans out there! Go Team Kaiser!! 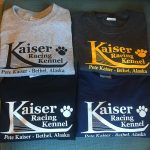 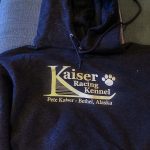 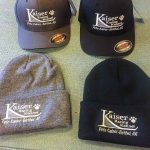 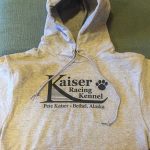 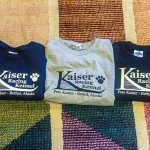 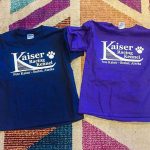 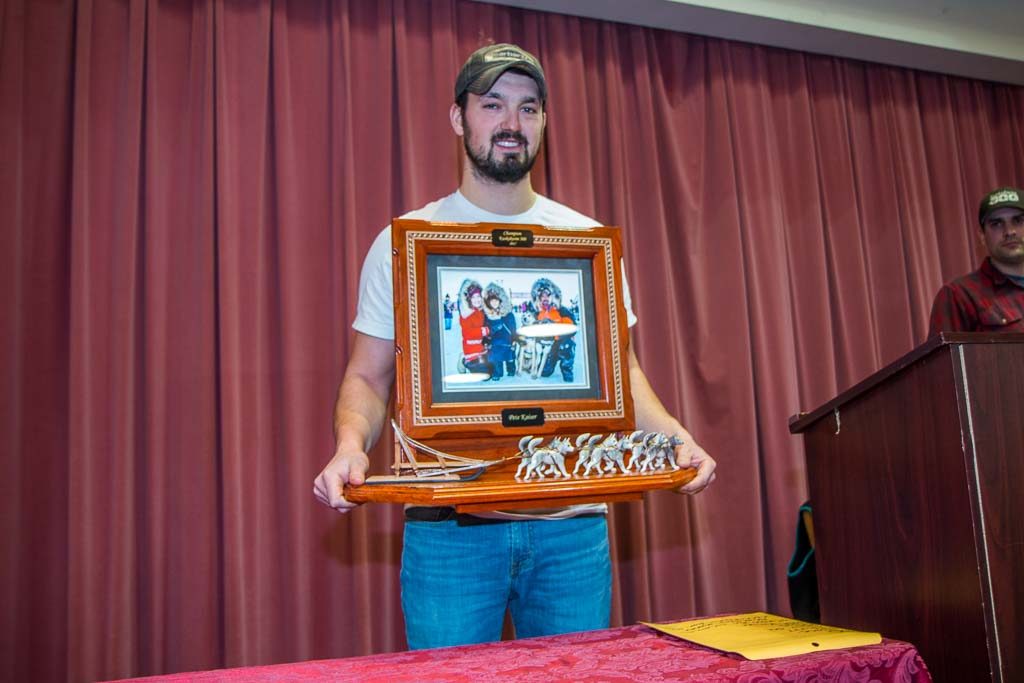 Give a musher a choice between traveling down the trail or standing up in front of a crowd of people, it’s guaranteed that the standing up to speak would be the more painful. Some are a bit at ease, but the folks we’ve been following the last few days are a pretty solitary bunch and these banquets are really a means to an end. They’d easily be more at ease in the dog yard.

After a great home cooked Italian meal and some dessert, the crowd of a few hundred listened to mushers regale their experiences on the trail. Unfortunately there were a few scratches this year, but even those folks were allowed to stand up and thank sponsors and friends.

In the end the crowd rose to congratulation Pete and the Team for a job well done.

Thank you to everyone and all of the great sponsors that allow this to happen. It is truly for you and because of your support that this endeavor exists and allows Pete and the Team to be successful. Thanks again and we will see you soon for the 2017 Iditarod! 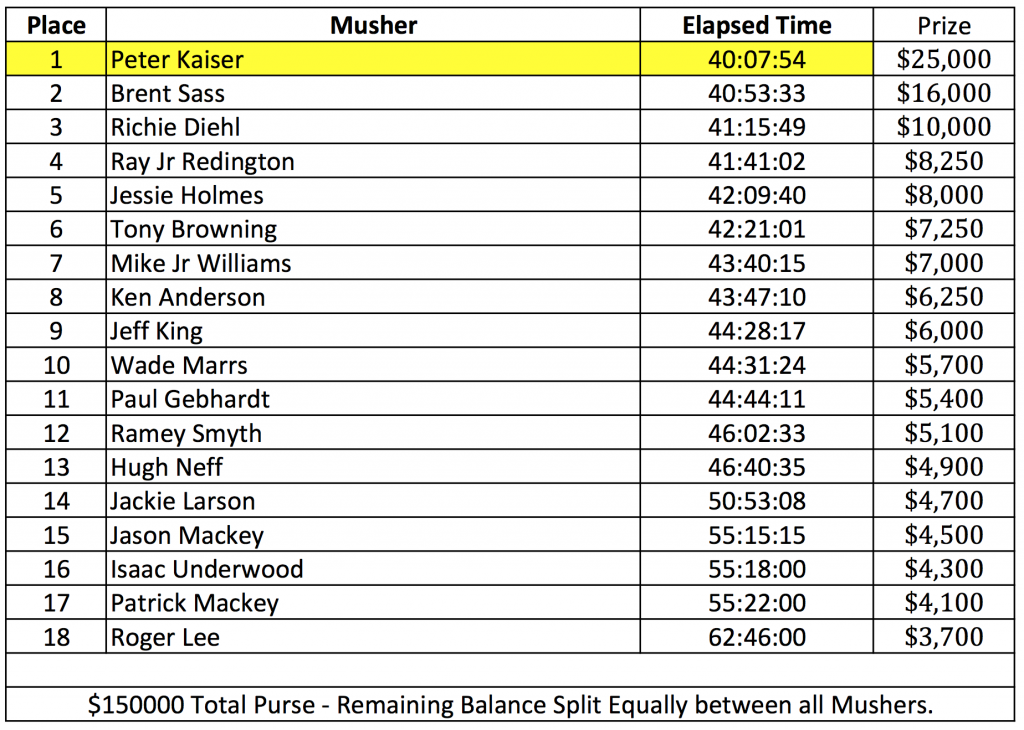