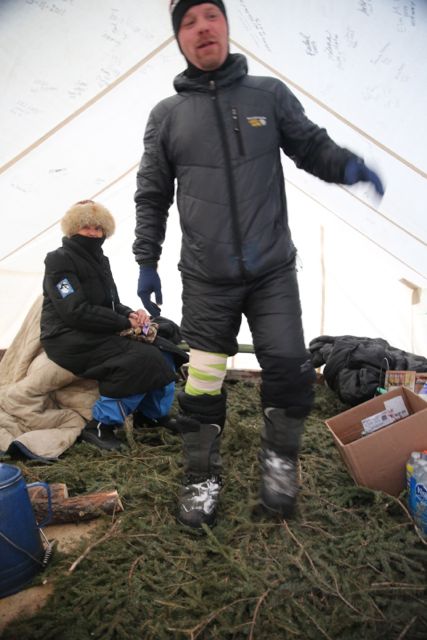 Photo from Sebastian Schnuelle’s Blog- Check it out!

Is there a Doctor in the House?

The trail is beginning to take its toll on musher, equipment, and Team it appears. We have been concentrating on our Trio of Teams from the Southwest, but now hear that it has been a tough one out there.

As I’ve been posting stuff, I’ve missed maybe the bigger story. The story of banged up mushers and equipment into Nikolai. Word from the trail is that Martin Buser has a banged up ankle, and other mushers are nursing leg and knee injuries as well. Sleds have take a beating with one story telling Martin Buser running out of runners and coming into the checkpoint on the bare aluminum of the sled. This bodes poor for folks behind, but with the light snow they are getting up there right now, hopefully there is enough to help the latter mushers out.

(UPDATED) Joe Runyan at Iditarod.com overheard Hugh Neff stating that the trail was non-stop action from start to finish from Rohn to Nikolai. He had to keep track every second to keep upright and underway. This is a stark contrast to many days on the sled of slow trodding movement. Think back to the 2012 Race when Pete completely fell asleep and passed Mitch Seavey on the trail without even knowing it. THIS is totally a different race action for Musher and Team. Iditarod Insider video of Nic Petit shows him telling the cameraman-“Those rookies- they don’t know what’s coming, their going to have a real FUN time.” Then he looks at the cameraman and tells him to have someone get hold of Jim (Lanier 73yrs old) “Somebody get Jim on the horn and tell him its not worth it. Don’t do it.”

Looks like this section of trail is going to live up to the fears from the Start after all. This section of the trail from Skwentna to Nikolai has been on everyone’s mind since the decision was made not to restart in Fairbanks. Even before it has been dancing in their dreams. Now it has come to fruition as a total nightmare. Veteran Musher and Crowd Favorite Dee Dee Jonrowe scratched this morning as did fellow veteran Linwood Fiedler.

This is the tell…

ADN.com has a great article on the whole ordeal. Check it Here!

Pete and the Team are making average time on the trail this evening. He was into Yentna at 7:24pm with a trail time of 4 hours and 2 minutes. Unfortunately I spent my money on the GPS tracker and it isn’t working correctly. We aren’t getting much data from the GPS right now, so stay tuned!

Everyone is heading down to Willow for the Official Start of the 2014 Iditarod. We will be there of course with interviews and photos. Join us! The Start begins this afternoon at 2pm. 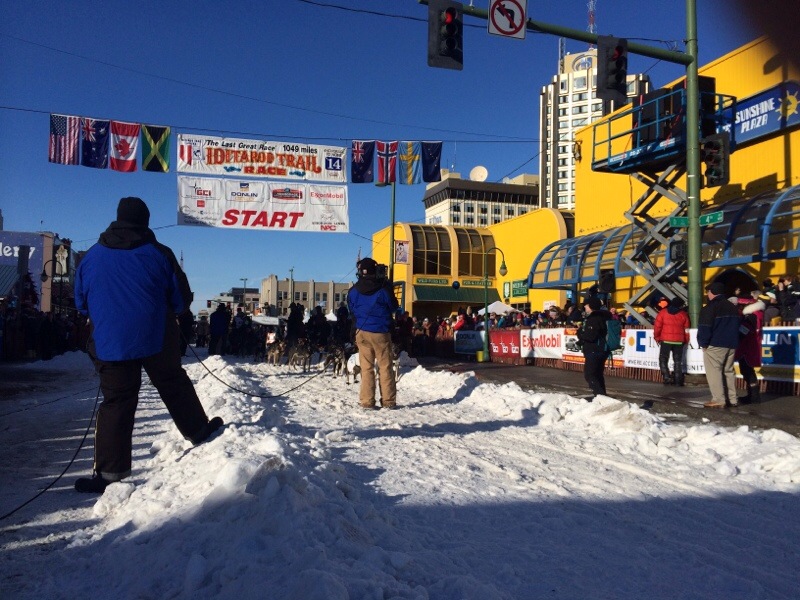 We all arrived at Just before 8am to get underway. We have a ton of media to share, but next on the agenda is lunch! Have it for you soon!

We have been waiting for this decision with bated breath so to speak. There are many reasons to stay and some to go, but now we know. Iron Dog racers have just completed the section of the race between Willow and McGrath. The Farewell Burn will be the most treacherous, but the rest of the trail isn’t in too bad of shape. Let’s hope for a bit of snow before the Race Start in two weeks.

The 2014 Iditarod Trail Sled Dog Race will start, in earnest, in Willow as originally planned. Race officials were considering a move north to Fairbanks.

Following the March 1 ceremonial start in Anchorage, the 70 mushers currently signed up to run the 1,000-mile race to Nome will set off from Willow on March 2, Iditarod officials announced Monday. The Iditarod Trail Committee’s nine-member board of directors met for about two hours Monday at Iditarod headquarters in Wasilla to make the decision, race director Stan Hooley said.

“I think the board was very, and rightfully so, interested in as much detail as we could come up with in terms of the scope of work and the plan of attack to improve what today is a pretty poor trail and transform it into something that, come race day, will look quite different,” Hooley said. “It’s a lot of different types of work, but all focused on making a safe trail.”

A lack of snow and a January warm-up left trails icy or bare and many people wondering about increased danger to dogs and mushers. Race officials began considering a move in early February. Only once in the Iditarod’s 41 previous runnings, in 2003, has the race started there.

The change would have bypassed the Alaska Range and put mushers on a trail following several unfamiliar checkpoints — including Nenana, Manley and Tanana — before following the traditional route from Ruby.

But early Monday afternoon, Iditarod officials said the board had decided to keep the restart in Willow. The decision was unanimous, Hooley said, but the discussion preceding it took longer than expected.

The final call hinged on a belief that heavy equipment can grind up about 65 miles of ice into snow down the trail from Willow, in the Susitna and Yentna rivers area. And that work depended on whether the river ice was thick enough to support the equipment, Hooley said.

Over the weekend, samples showed the ice was thick enough, and grooming is set for a few days prior to the race, he said.

“You really don’t want to do it too far in advance,” Hooley said. “There’s no reason for it to get a couple weeks of traffic before it needs to be used for the race.”

Of course, over such a long distance, there are other concerning sections, like the Dalzell Gorge and Happy River steps, but nothing the usual crews of trail workers cannot handle, Hooley said. They’ll have to build ice bridges over open water, smooth out ruts and clear brush in some areas, he said.

“If you went up there today and looked at it, you would say, ‘You can’t run dog teams through here.’ We’re confident with the work that’s planned that those areas can be repaired in a way everybody will be happy with,” Hooley said.

Without the powerful groomers working closer to the race’s restart point, Hooley said, “it’s clear to me we’d be headed to Fairbanks.”

“I don’t think any of us would have had any problem with going to Fairbanks. Because that community turned itself inside and out to make for a very successful restart in 2003,” Hooley said. “We appreciate that mind set, that attitude, that spirit very much.”

Asked if Iditarod officials feared criticism during the race for keeping the restart in Willow, Hooley said no.

“I think everyone understands that there is risk to the Iditarod regardless of where you are. There would be risk running the race from Fairbanks. There’s risk running the traditional route. I think most people will realize that and understand it.”

Unfortunately a stomach bug took hold in the Kaiser Support Team just after the Start of the Race. Janet, Tillie, Ron, and eventually Cindy came down with a terrible stomach issue.

Since they weren’t able to make it to the Finish Banquet, Here are a couple of highlights by Jeff King and Martin Buser. One thing about mushing– When you have been on the trail as long as these two have, you can spin a tale that makes the crowd smile each time. 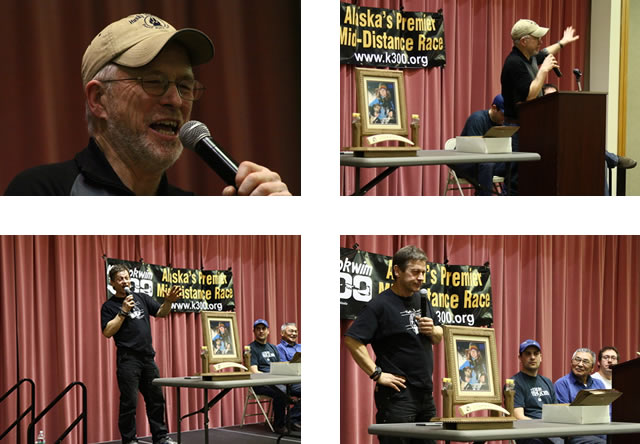 Martin Buser’s Tale of the Tree- 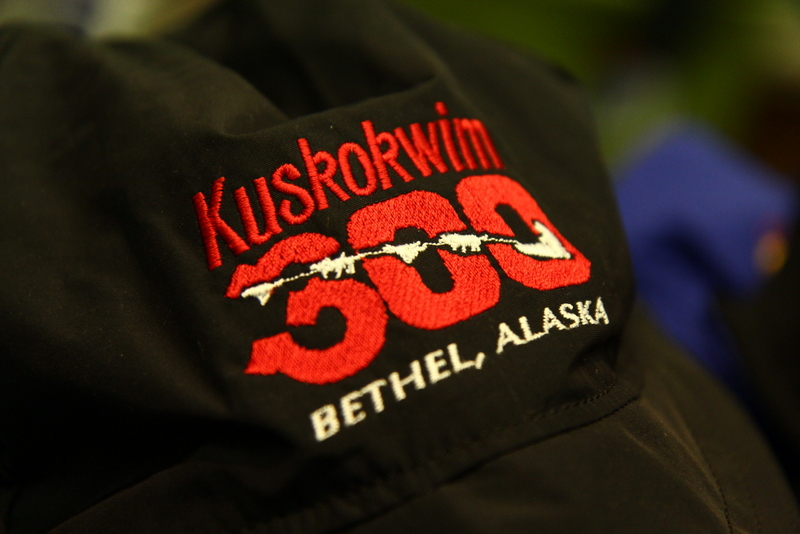 Well wishers, family, friends, sponsors, and Musher gathered at the Bethel Cultural Center to remember the 2014 Kuskokwim 300. A great time was had by all and in addition to the prizes passed out at for the races, Local gal Susan Taylor won the $50,000 raffle. Mushers regaled the crowd with stories from the trail and brought smiles to the crowd. I’ll be posting the audio tomorrow, but here are the photos!