In a spectacular finish to the Bogus Creek 150, Matt Scott pulled off the Win, but it was the sprint to the Finish Line between 63 years young, Ron Kaiser, and 16 year old, Jason Pavilla, that was the talk of the morning.

Ron had been trailing the top 3 Teams, for most of the race, but after Akiachak it got very interesting. Trail watcher Linda Curda reported that after Akiachak, Matt pulled away from the pack on the portage to the Gweek River. Ron and Jason, along with Father Alexie Larson, began fighting away to the finish. Ron and Jason sped up and overtook Father Larson about a mile from the finish line and then it was a sprint for second place.

Linda reported that Ron over took Jason less that 200 yards from the finish line. “If the line had been at the mouth of the boat harbor where it has been for several years, Ron wouldn’t have made it. He passed him RIGHT THERE!”

At the finish line, Jason, last year’s winner had sweat dripping from his all wet hair. Ron as well was out of breath. For the dogs, it was just another day of racing and they looked awesome.

Apparently Kaiser leader, Palmer, broke his chain twice during the race and the Team caught up with him and off they went. Palmer has led many wins for Pete and Team Kaiser over the years. He was obviously in charge of the race and knew the trail well.

Photos are on the way, but here is the video from the Finish. Apologies for the out of focus parts. It was a little chilly and my frozen fingertips apparently switched off the autofocus. It’s a great watch though to see both Teams cross so close together.

Congratulations to Matt Scott – 2020 Bogus Creek Champion! Here’s the finish details. There are two mushers still on the trail.

As per usual, the Bogus Creek is heating up to be an exciting finish. Father Alexander Larson has been leading the race all night, but hot on his heels is last year’s winner Jason Pavilla and Matt Scott, both who are having great race times. Ron is in 4th position about 4 miles back from the leader.

The leaders have made their way back onto the Gweek river and are about 13 miles from the Finish at 9am this morning. I’d guess we are looking at a 10:15-11:00am finish for the top 4 Teams.

Times are pretty identical to last year, but it has slowed on the last part of the race since Tuluksak. It will be interesting to hear tails from the trail 🙂

The Top 3 Teams are surely going for it, so grab a cup of coffee and head on down to see the finish!

A beautiful trail up the river has Teams closely packed together we all slept last night.

Jeff King checked into Kalskag first at 4:02 with only a 6 minute lead over a group of 4 mushers only a minute apart. The fastest time over the 50 mile route was Joar Ulsom with 4hrs 56 minutes, but the top five times are only separated by 5 minutes in those 50 miles with Pete and Aaron Peck only one minute behind. 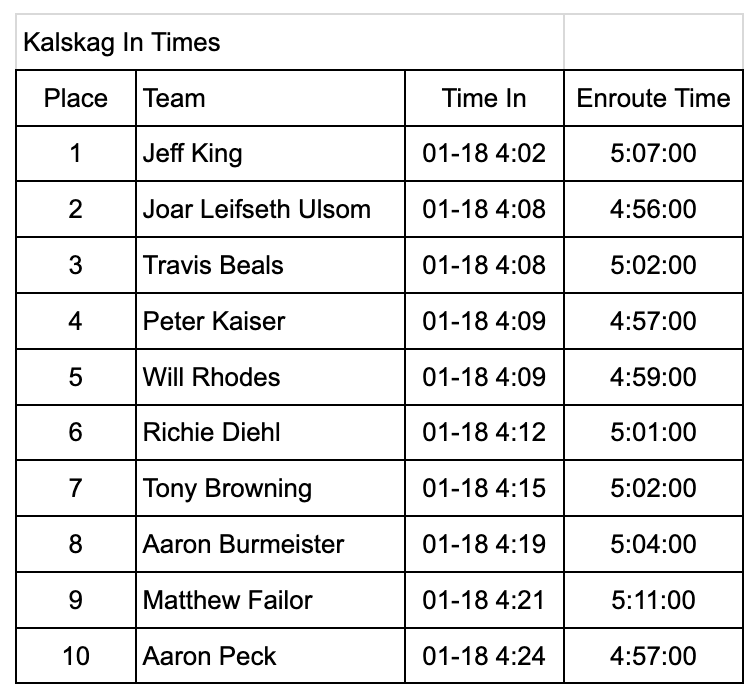 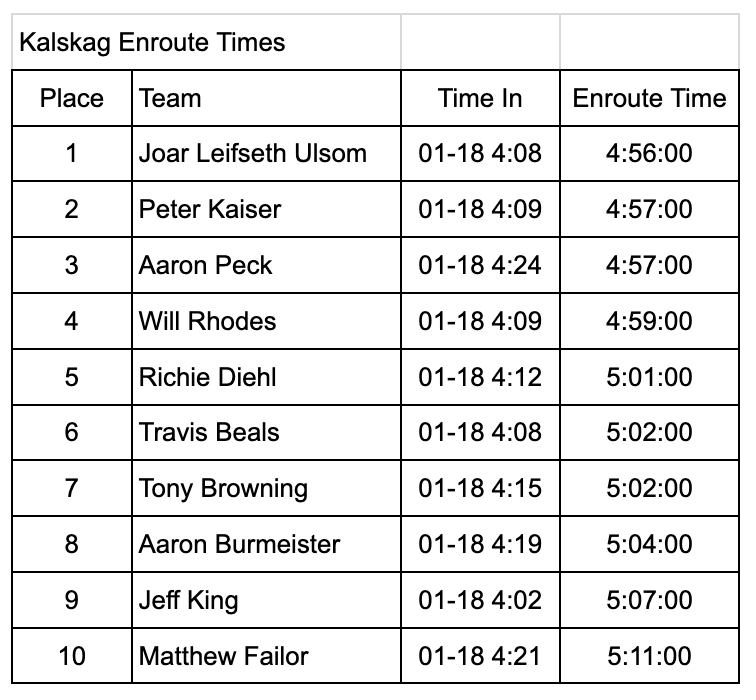 Considering that checking in 10 Teams at once doesn’t allow for a real accurate picture of the trail times, I’m considering a virtual tie among the top 5 Teams. There’s just not much distance between them. As Andy Angstman reported to K300.org, Teams were like a “Train” coming into the middle river checkpoint.

Comparing the race to last year, the times are very close, but a bit slower. Last year Jessie Holmes made the run in 4:28 with the top five teams under 4:45. Still a very fast race.

This year the trail route will head overland through the Whitefish Lake loop towards Aniak. This 50 mile trail routes up through the tundra and towards the Aniak River before heading into the Aniak Checkpoint. I’d guess that Teams will be taking 4 hours of their 6 hour mandatory rest before heading out. The race differential, which accounts for the staggered start times also will be added to rest in the Kalskag checkpoint.

Weather is just great. It’s cold, but clear and not so windy. Winds haven’t been a factor so far, so cross your fingers!

I don’t think Pete has every gone out so early! Gave me a chance to shoot some other Teams. Boy, this is sure a competitive race! Look at these beautiful Teams!

As we look through these memories of a really nice start to the race, Pete and many Teams are through Tuluksak and bound for Kalskag. It is a clear, cold night with brisk temperatures, but little wind so far. Teams are making good times up the trail with Jeff King leading a close group up the Kuskokwim. We can’t “see” him, though, because his tracker isn’t working. Back to the imagination fo what is really happening. I guess we will find out in several hours.

Pete and Team Kaiser arrived into Tuluksak at 11:12pm in a pack of 12 Teams within 6 minutes of each other. Jeff King arrived at 10:55, about 10 minutes ahead of the pack. It is so early, that this is pretty normal and the next 5o mile run into Kalskag will begin to show what Team placement.

I teased both Myron and Jeff about being “old timers” in the drawing photo album, but it seems that Jeff is looking for another jewel to make it an even 10 K300 wins!

Here are Pete and the Team at the Starting Line: Go Team Kaiser!

Ron has been training with Pete this season and with much time on the runners, it was his turn to take to the trail of the Bogus Creek 150. After 40 years of mushing dogs, Ron still loves the sport and getting out on the trails. A few years ago he had a shoulder injury that slowed his enthusiasm a bit, but after a bit of surgery and recuperation, he is back in the saddle and rarin’ to go!

Normally Ron is the pit boss and keeps the logistics underway for Pete and other handlers that have run either the K300 or the Bogus Creek. With Ron and Pete both racing, a cadre of helpers including Lucas Salzbrun, Josh Cadzow, Uncle Mike Shantz, and Jen Peeks made easy work of the starting line. Ron’s pit crew for the race is Rick Hanson who will be meeting him up at Bogus Creek with some food and a warm tent to warm up and get ready for the second half of the race.

Here are the photos from the start.
Go Ron Kaiser!!