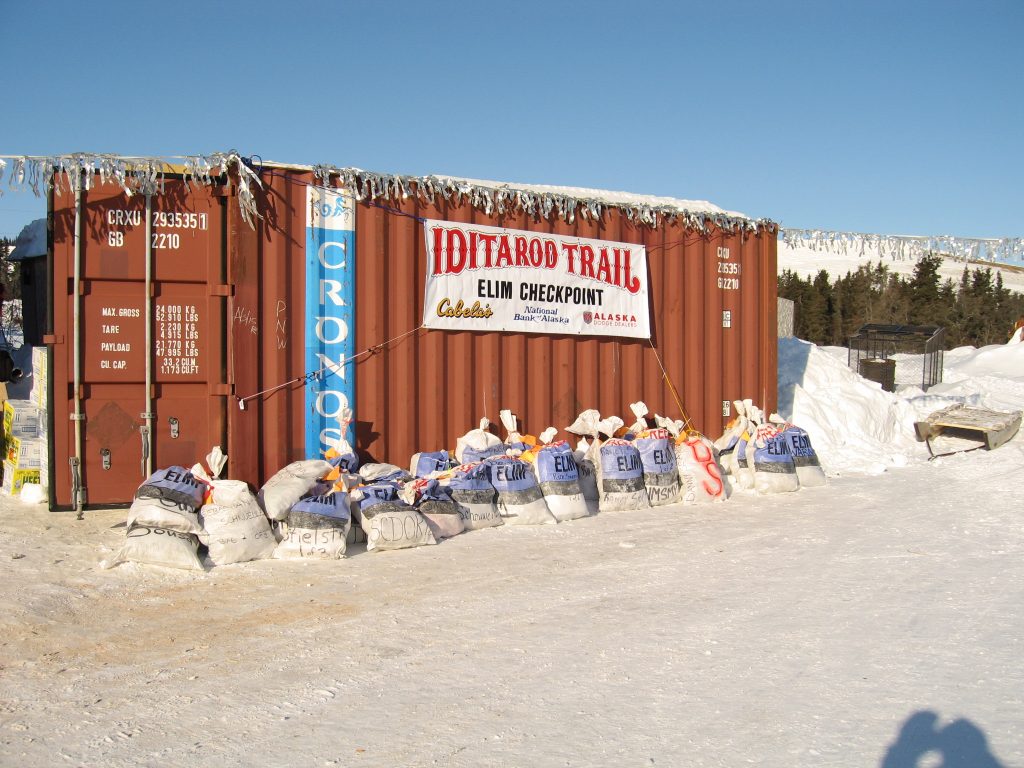 Welcome to the final Stretch!! Tomorrow this time we should be at the Burled Arches in Nome awaiting Team Kaiser to cross the Finish Line!

Early this morning after a good long 6:49 break to refresh after a long arduous journey through blizzards and wind, Team Kaiser left Koyuk bound for the final mandatory 8 hr break in White Mountain. After dropping a dog at the checkpoint, Pete left for Elim at 1:51am for the 48 mile run.

Weather is unchanged, cold and a chilly, but nothing like yesterday’s blizzard conditions.

This trail will be marked way better than virtually any of the previous Iditarod trail as it is a well used trail for villages headed to Nome.

Pete left Koyuk about an hour after Ray Redington Jr. giving the Team a good long break for the last legs into Nome. He is in a good position to finish in 5th position, but it is pretty early to be even thinking position for a number of reasons. The goal in any race is to finish with a happy Team and is always primary to Pete’s concern. Think back to a finish several years ago where a quick storm and a tired Team had Pete following musher Kelly Maixner through the blowhole into Safety and into Nome. I’ll never forget the sight of four teams with just the light of the headlamps coming into view out of Nome. Paul Gebhardt led Kelly and Pete into Nome. It was quite a story. Rick Swenson won one of his races in a blizzard where only he had made it to Safety while others were stuck waiting in White Mountain.

It’s often easy to thing that once White Mountain is in sight, the race is over… Ask Jeff King and Aliy Zirkle about that one. Dallas Seavey won after Jeff scratched and Aliy was holed up in the Safety checkpoint because of a freak windstorm. Calm when Dallas mushed through, only hours before it was a desperate situation with wind and horrible conditions.

Bottom line? Good Luck Team Kaiser! Winds at your back and concentrate on getting to Nome in fine style!!

Today
Snow likely, mainly after 4pm. Areas of freezing fog after 4pm. Cloudy, with a high near 18. North wind 5 to 10 mph. Chance of precipitation is 60%. Total daytime snow accumulation of around an inch possible.
Tonight
Snow likely, mainly before 10pm. Areas of freezing fog before 10pm. Cloudy, with a low around 5. West wind around 5 mph. Chance of precipitation is 70%. New snow accumulation of less than one inch possible.

Pete and the Team are tired “Puppies” tonight! It was mentally and physically challenging running against the wind and across the ice to Koyuk. Pete in this interview, though, looks really great. You can just see through the tired and the wind that this young man that we follow each year is really in his element. THIS is long distance sled dog racing!!

Pete lost almost an hour over Ray Redington arriving into Koyuk at the checkpoint 171 miles from Nome at 7:02pm.

I’m expecting a 4 to 5 hour break before he readies the Team for the run west to White Mountain and a mandatory 8 hour break.

Weather tonight is windy but may subside as Team head west.

Just one look at the Insider Video tells us that this is a tough one for Man and Team!

The wind that was predicted to be so so not so bad a couple of days ago reared its head into an angry monster and Teams are face in and struggling. All of the Teams show much slower speeds than going into Shaktoolik.

Pete and Ray are still about 20 miles or almost 3 hours until Koyuk.

Go Team Kaiser! And good luck to all of the Teams out there today as we relax indoors and watch from our easy chairs!

Take a look at Pete and the Team’s speed before moving out onto the ice and then after traveling on the bay trail.

After a 5 hour break, Pete and the Team are out of Shaktoolik with Ray Redington in hot pursuit.

Expect a long run, but after that break, I’m thinking it is going to be non-stop unless weather or the Team becomes a factor.

I can still hear them last night barking and wanting to GO GO GO!

Here’s a little sample to jog your memory!

Pete and the Team arrived into Shaktoolik early this morning at 4:31 and have been resting since. Weather in Shaktoolik is pretty much as it always is– Windy! Ice fog is also a factor and visibility will be poor.

Teams will rest up for the 50 mile journey to Koyuk into the wind. Apparently the trail is following the coast rather than going straight across the bay as is usually the case. A warm winter has more than likely moved the trail which will make it a bit longer as well.

Teams are coming into Shaktoolik at this hour with Travis Beals, Wade Marrs, and Richie Diehl all in to the checkpoint.

This race isn’t over at all as there are a couple of hundred miles of hard trail and about 35-40 hours left on the race clock.

At the front Mitch Seavey is watching Joar Ulsom battle Nic Petit for the top position, yet Mitch has a bunch of tricks up his sleeve that could put him forward easily. Joar pulled in front of Nic over the ice, so we will see how it goes as rest becomes a factor.

Ray and Pete have at least 9 teams vying for the top 5, and many more are headed for Shaktoolik.

It is going to be very exciting to be sure.

One thing that I found so notable was the energy of Pete and the Team into Unalakleet last night. It looked like they were at the START of a race, not 800 miles into it. It was such a beautiful sight to see.

Mushing weather for today is going to be wind from the North gusting to 25 with periods of freezing fog and possible snow showers. It’s going to be a cold one as traveling in ice fog always seems to make it FEEL colder. Hopefully the trail is well marked for those periods of ice fog.

As expected Pete and the Team didn’t stop for a break in Unalakleet. Kale Casey Live was live at the checkpoint, so we got to see it live. Pete waited as the Veterinarians checked over the Team and then barking and lunging, they headed off into the night just after Ray Redington Jr.

Richie Diehl and Wade Marrs stopped and are putting out straw and taking a break.

So the Race is on for the top 5 as Teams jockey for rest vs trail.

After an epic 8 hour run, both Pete and Richie pulled their Teams off the trail for a 4 1/2 hour break. It is 62 miles to Shaktoolik and I am thinking that’s where they are headed. Wade Mars, who had been following the duo for the last day or so stopped about a mile up the trail from them and took 4 hours for his Team.

At this point in the race each minute of rest really pays dividends. Mushers are rolling the dice to give their Teams enough rest, but not too much as to lose position. I imagine Wade was watching up the trail and pretty nervous with the Kuskokwim Boys right behind them.

Once they reach the coast, Teams will then head up a fairly well used trail to Shaktoolik and then over the ice to Koyuk. Leader Nic Petit and his Team took only 5 hours 30 minutes or so in Unalakleet and was off to the North. In the Insider video the Team looked pretty happy with tails up and barking. A good mark for a Team.

Weather for this evening is not bad, but as luck would have it, winds will switch to the North and Teams will be looking into it a bit for the run across the bay to Koyuk.

Currently in Unalakleet it is 10 degrees, light winds from the East.