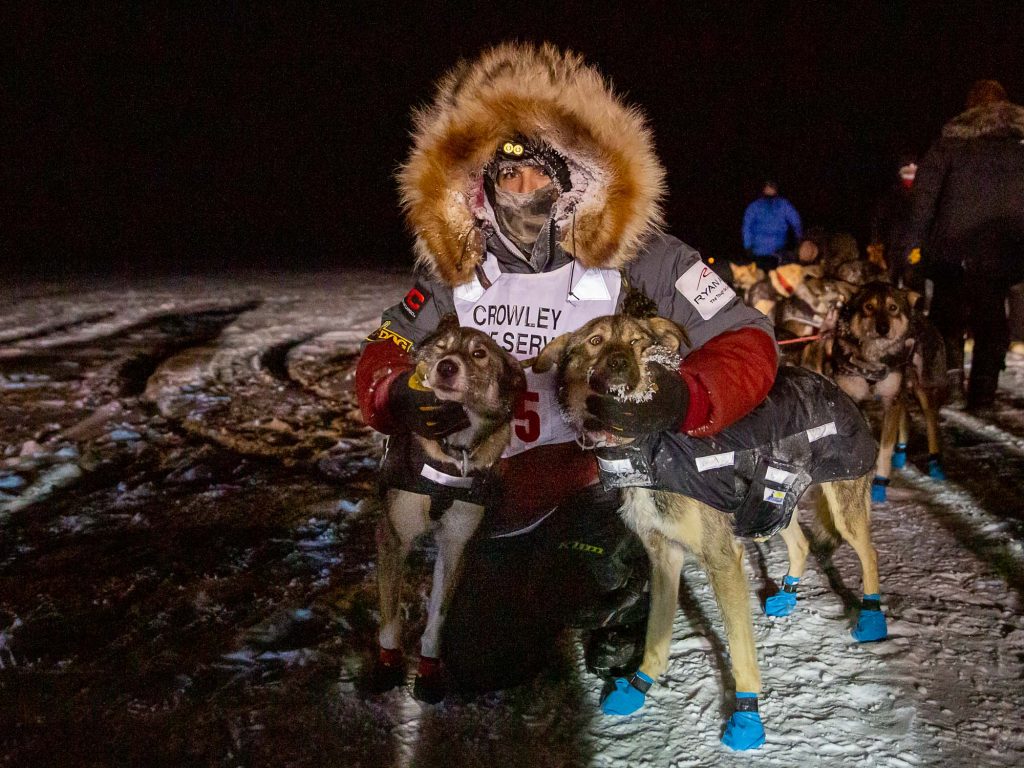 It’s been a long time coming for Richie Diehl, but tenacity and an always positive attitude is really what are the hallmark of his life, training, and dog program. As Teams left the halfway point in the Race, it was evident from looking at the tracker that Richie’s group were the ones to watch. To win, though, there had to be perfect conditions and no mistakes as the field of mushers for 2021 were very closely matched.

Richie and the Team crossed the finish line in Bethel at 5:02am, cheered on by fans distanced by the Covid crisis, and chilled by the -10 degree air, but by no means not enthusiastic. “Yay Richie” could be heard by the voices of Jill Hoffman and Bev Hoffman, who perennially are there to great Team Diehl and Team Kaiser.

This year, as there is no banquet or award’s ceremony, the trophy was presented at the finish line. A beautiful grass woven mat made by Kelly Lincoln was presented by Race Manager Paul Basile and winnings of $9000 will be mailed out and waiting for Richie once he returns home to Aniak.

As KYUK’s Anna-Rose MacArthur was getting her finish line interview with Richie a light appeared and only 12 minutes after the leader, Team Kaiser’s own Ron Kaiser arrived into Bethel to claim second place. Ron was thrilled with his performance. “I kicked from Akiachak, but it wasn’t enough. This Team is great though. It was a blast,” said Ron, still sweating from his efforts. Asked about the race he said that it was really a special race because he got to race with his son, Pete. Due to the Covid rescheduling, Pete could enter two Teams in the Bogus and Ron got to take the A-Team around the course. “I wanted to give him the best chance to win this thing,” said Pete. “It was close, but Richie’s got a good group this year as well.” Pete was pretty proud of the B-Team and said that he was easily as fast as his Dad’s group and several young dogs really showed their stuff. Pete arrived at 5:20, just 8 minutes after the A-Team and 20 minutes behind Richie and this year’s Championship Team.

In two weeks we’ll all meet again for the running of the 2021 Kuskokwim 300. One notable mention this year is the Father-Son connections. Ron and Pete were the only duo running together in the race, but two other Teams, the Pavila and Alexie families are also doing something similar. Jason Pavila, son of Louis Pavila is running the Bogus 150, while his Dad will take the same Team into the K300. Raymond Alexie is running this race and his Dad, Harry, will be running it as well in the 300. I thought it was pretty neat to see this relationship play out in the sport. The best part of it is that it shows the health of our sport– Continuing it on into the next generation. AWESOME!!

Here are tonight’s Finish Line photos. I’ve got video that I’ll put up, but right now it’s time for a bit of shuteye!!