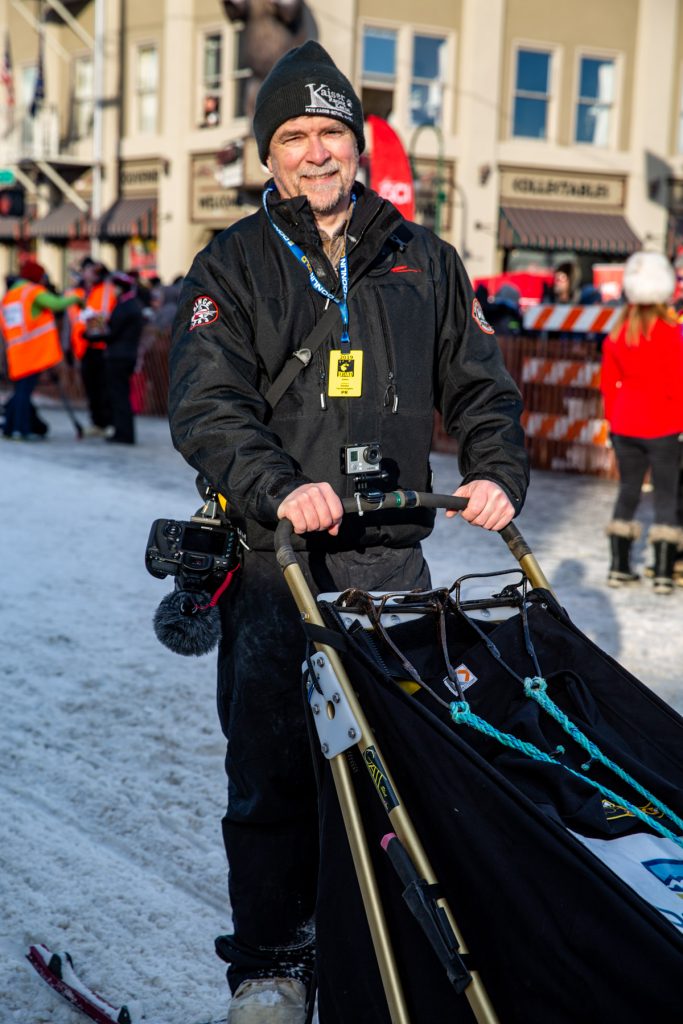 For 10 years I’ve been writing about Team Kaiser. So many words for so many races and events. Last year we passed the 1000 post milestone. All those words written as a spectator trying to give you the feeling of what is happening from the view of the bystander.

Well today, I’ve got a personal story to tell and as Myron Angstman likes to say…”Oh Boy!”

It all started at the banquet on Thursday night when Pete said, “You should ride the tag sled.” I told him there were so many other people that could have that honor, but I was very touched. Then the next day I did an interview with Myron and felt his excitement as he was going to ride Jessica Klejka’s sled as well. Then a text from Pete, “You should totally do it!” A quick call to my daughter, Kelsey. “I’m not sure about this…” “Dad! You’ve totally got this! Go for it!”

I texted Pete…”I’ll do it!” He said it’s just like riding a bike, no problem… I’m kinda worried about crashing I say… “Don’t worry, Jeff King has crashed a couple of times as well.”

Oh! Well that gave me confidence!!! Haha! Well, I was committed now. Just don’t mess up!

My Iditarod Starts are pretty anxious to say the least. Get all the equipment prepped to make sure I have what I need to capture moments, sponsors, and try to bring you, the fan, into the action of the event. It is a full plate and I get pretty nervous wanting to do the best I can for Pete and the Team.

The night before a race is spent charging batteries, prepping cards and all kinds of things. Now the added excitement gave me few hours of sleep before I was up at 5am making sure I was “Ready!” I called Ron and asked for snow pants. You have all seen “Ol’ Blue” my blue snowsuit for years and I wanted to wear my Ryan Air jacket to give one of our prime sponsors some love.

Then it was off to Sterling Rearden’s place to meet Pete and drive with him to the Starting Line. So far so good. Pretty much as per usual. After 10 years, Pete has a system… No problems.

The next bit was a bit of a blur. As bib #9 we were going to head out early and all of sudden I had less to do than normal. Usually I am running back and forth to all of our Kusko Mushers and grabbing photos and interviews. This morning I only had time to stay with Pete. I was going to be LEAVING!!

I looked frantically around to see if anyone could take photos for me. Zoe! “Hey. Know anything about cameras?” “A little,” she says. “Awesome!” Here’s a good camera. I put it in Automatic. Just shoot everything. I give her a little instruction and told her, “When in doubt, shoot more!!” Grinning from ear to ear, she was off into the photo zone!

Me… Hmm Not so Check yet!

Pete says, “Hey, let me show you a few things.” He shows me the runners and the brake and tells me it’s no problem. I see Jackie Klejka and she says, “Just bend your knees and hold on!”

An official comes up and says it’s time to go. We are a bit behind, so we gotta get going.

I have my camera still harnessed and Pete says, “You going to take that?”  “What’s the worst than can happen, Pete?” Haha! We’ll see!!!

Tug, Tug, Tug and we are off on fourth avenue. It’s not so bad really, but the sled is the race sled and very flexible. It moves quite a bit. My job is to help Pete slow the Team so I watch Pete like a hawk and step on the brake when he does.

First folks we pass are Team Real Diehl. Cheering us on! The crowd is cheering and the dogs are barking. It was actually really loud as we moved forward. The Team is also slowed by the handlers which keep the Team headed down the avenue. Their job is to keep the Team headed in the right direction.

Senator Lisa Murkowski steps up to say hi to Pete. She’s always at the Start and always says hi. Little do I know that she will be riding Jeff King’s tag sled. Hmmm… So I’ve got pleasant company! Myron Angstman, Lisa Murkowski, and me. All riding sleds. We’ll have stories to tell, I’m sure!

“And up to the line we have #9, Peter Kaiser from Bethel, Alaska.” I’ve heard this introduction so many times I can almost recite it by heart. It changes a bit each year, but it’s generally my queue to get ready to shoot. I decide, no shooting! Just don’t do anything stupid, like fall off or something. No photos until we get underway. I had just shot the Rondy Sprint mushers, so the right hand turn from 4th avenue to C street was burning in my mind. How the heck am I going to stay on???

It’s a totally different deal riding versus watching. It’s pretty loud up until they say GO. Then as we get going, it gets quieter almost immediately. I see people I know in the crowd and hear my name. I wave nervously, still terrified that I’m going to do something stupid.

“GO Pete!!” Everyone knows him and for the next 11 miles we hear his name.

There it comes… That darn turn!! Pete looks back and says “Just lean into it if you have to.” Jackie had told me not to ride the brake as that makes it worse. We enter the turn and I lean into it slightly.

SCORE!! We made it!! Whew!! I find that lightly tapping the brake works pretty well in the turns. Ahhh! A turn veteran, I am now starting to think I might be able to do this afterall! Pete and our Iditarider, Mike Donovan are waving to the folks and I start doing the same. We make our way across town and for the next 4-5 miles it’s not so bad. Really beautiful day and the everyone was having such a great time.

It is amazing how many people are out! We start into some trails and there are people grilling. Tossing food and beer at the mushers. Cheering as we go through. I was still to nervous to shoot, so I just enjoyed it. There were signs and banners and the smell of grilled food for a bunch of the time.

I’m thinking I’ve just about got the hang of this when Pete looks back and says, “This next turn is a bit sharp.”

We go down this little incline and start around the turn. WHAM! I’m over on my side and into the snow I go! FACEPLANT! Of course there were tons of folks there. They had been cheering and waving and all of a sudden… Dead Silence!

“Yeah!” I wipe off the snow from my face, grab the snowhook and jump back on the sled. “I’m ready!” I look at the crowd all silent like… “Hey,” I says. “How about some applause for that awesome faceplant??”

We get going and Pete, still laughing, asks if I’m okay. “Nothing hurt but my pride!!!”

From there it was smooth sailing and really pretty trails through the woods and over little streams. As we made our way near the hospital… Oh no! Another turn. Pete tells me it’s a little tricky, but not so bad.

Around we go…. I’m making it. I’m making it… OH NO! Splat! On my side and into a snowbank. This one was more fun as faceplants go. Not so hard. Just snow in the nostrils and ears. Haha! Now I’ve got confidence! I can faceplant with STYLE!!!

Pete is totally cracking up. “I thought you had that one! Don’t worry, that was the last one.”

“Nothing hurt but my pride!!”

I hear honking and “Dad! Dad!” I look over and I see my daughter and granddaughter Kiah in a car going crazy. “Hey! Look at me!!” Fun to see them.

At that point we entered trails that you wouldn’t believe were Anchorage. Close woods. Snow. Just beautiful to be mushing with the dogs. They don’t make much noise. Just the sound of the runners and their paws running down the trail. Pretty quiet and very beautiful. The trail keeps the sled in the track and has me wondering how in the world Pete keeps this sled going down the trail on some of the wild trials he’s been on. It is a skill for sure.

We arrive at the Campbell Creek airstrip and Pete motions back that we are stopping. Out comes the Iditarider and Pete puts him on the runners! Pete climbs in the sled and off we go! A once in a lifetime experience for our Iditarider and my heart just warms. This is a gift that few can offer, but even fewer do share. The old guy had to be so thrilled. Waving at the fans as we went by. It was just awesome to be a part of it.

After about a half mile we stop and Pete switches places and we head into the Campbell Creek checkpoint.

“Entering the chute we have #9, Peter Kaiser…”

What an experience! So blessed to be a part of Team Kaiser and more, to have such a good friend as Pete.

Here’s the photos from “The Ride” And… Neither Myron OR Lisa faceplanted!! Haha!!

At the Starting Line

And the crowd goes Wild!!

The Team is Awesome

You can do this Mike