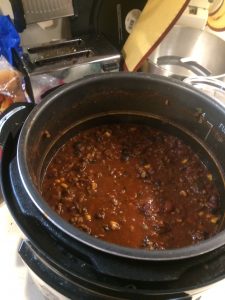 As Pete moved down the trail, the Team Kaiser Pit Crew were boarding a flight to Anchorage and then to Nome. After a bit of a nervous morning when fog delayed our flight we took off to Anchorage hoping nothing happened during the flight. A few years ago we boarded the flight with Jeff King having the win in his sights only to deplane and find that a freak storm had caused him to scratch. Deplaning today in Anchorage, Ron, Bethany, and myself were deeply interested in Pete’s progress.

Pete, tired, and beat up from miles and miles of miles, made steady progress and arrived into White Mountain and a deserved 8 hour mandatory break at 6:35pm with his Team of 8 dogs.

Meanwhile as Pete takes a rest, Team Kaiser Pit crew is enjoying a great dinner of chili and bread at the best host family in Nome, Bob and Sherrie Madden’s home.

Tonight
Snow likely, mainly before 10pm. Areas of freezing fog before 10pm. Mostly cloudy, with a low around 4. North wind around 5 mph becoming west after midnight. Chance of precipitation is 60%. Total nighttime snow accumulation of less than one inch possible.
Wednesday
A 20 percent chance of snow before 10am. Mostly cloudy, then gradually becoming sunny, with a high near 11. West wind around 5 mph.