Once Pete completes his 24 hours layover (24 hours and 10 minutes with the differential) he will return to the trail that will take him north bound for the halfway point of Cripple and the Yukon River. Dallas Seavey and John Baker battled it out for the half-way prize early this morning with Seavy winning the $3000 in gold. GPS Shows them back on the trail to Ruby. The front runners are headed for Ruby, but haven’t taken their 24 hour yet.

We’ll see how this strategy pays out. Many mushers are taking layovers just before the half-way point, but others are moving past the half-way point. We have seen this before, but I don’t remember this many. It is still to early to see who is really leading the race, but my bet is that the group leaving with King, Neff, Seavy (Mitch), and Schnuelle is the group to watch.

Pete will be able to return to the trail just after noon today. (The mushers that left early in the starting order actually get a couple hours extra rest in addition to being first out of the starting gate as the differential is added to the layover) 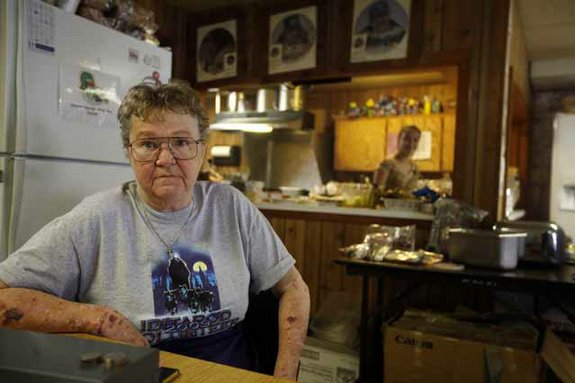 Jan Newton sits at the table as volunteers cook for mushers in the kitchen in the community center at the Takotna, Alaska, checkpoint on the Iditarod Trail Sled Dog Race on Thursday, March, 12, 2009. The 72-year-old Newton has been serving up meals and catering to mushers’ needs for decades.

Tiny village of Takotna is the spa of the Iditarod trail

TAKOTNA, Alaska – The homemade pies are cooling in the corner, the stereo is playing country music and the griddle is frying up a breakfast of steak and eggs, or just about anything else trail-weary mushers would want.

For mushers in the Iditarod Trail Sled Dog Race, the Takotna checkpoint is the Iditarod Spa. It’s where 72-year-old Jan Newton for decades has been barking at mushers like a mother dog whose pups are acting up.

“What the hell are YOU doing here,” Jan says as another exhausted musher with a windburned face enters the community center and sits down at the long mushers’ table adorned with a plastic red and white checkered tablecloth. “Just eat and shut up.”

No one actually thinks Jan Newton is in a bad mood. Everyone knows she has a heart of gold. She and her husband, Dick, have been providing a home-away-from-home for mushers since 1972.

Jan begins making her Iditarod pies – apple, cherry, pumpkin, blueberry, pecan, banana, lemon, coconut, chocolate, pecan and butterscotch – in mid-January. Then she has to find a place to hide the more than 100 pies from her husband and his friends.

“Reliving their youth,” she says of her 77-year-old husband’s plan to hop on snowmobiles on Friday with two buddies and travel to Nome and the Iditarod finish line about 700 miles away.

“He ain’t giving up,” she said, when asked about the wisdom of an old man setting off by snowmobile on the Iditarod trail, “not as long as I can keep going.”

Dick, known for his trapping skills (he just sent off 35 marten pelts), came to Takotna from Clayton, Idaho, in 1970, where he and Jan ran a cafe, hotel and bar that catered to miners. Jan followed two years later.

A friend, Dorothy Anderson, also called “Puddens,” got the Iditarod Spa going by suggesting the two make a few meals for the mushers. At that time, Takotna wasn’t even an Iditarod checkpoint.

“The mushers would stop to eat moose meat stew and chili. That is why we have those up all the time,” Jan said, pointing to a counter running along one wall of the community center with three large stock pots.

Anderson pretty much left Jan to her own devices four years later and “you can see how that went,” Jan says. “Things just grew.”

“If you come in and ask for something and we didn’t have it, we had it the next year,” she said.

Musher Sven Haltmann, competing in his second Iditarod, enjoyed a breakfast of scrambled eggs, a sausage patty and potatoes on Thursday.

“It recharges the batteries,” he said. “You can just come in here and say I’m hungry and within 10 minutes they have food on your table. … It has always been great.”

Haltmann said mushers sleep in the church where there is a heater for drying out wet clothing. Many of them sleep under the pews.

Most of the mushers this year chose Takotna to satisfy one of the race requirements, taking a 24-hour break. Mushers can take the 24 anywhere along the 1,100-mile trail but Takotna is hard to pass up, even in a good trail year.

This year, the trail up ahead is said to be tough-going. Snowmobiles recently cleared it of yet more snow but it had not “set” yet, meaning it likely would be a slow slog on a soft trail.

Redington put in another order as he prepared to hook up his dog team and leave – two double cheeseburgers for the road.

“It is unbelievable what they do for us,” said musher Bill Cotter as he sat down to a breakfast of medium-rare steak, eggs over easy and wheat toast.

Cotter, who is running in his 20th Iditarod, said what he likes most is the way the checkpoint takes care of his dogs. The operation is efficient, he said. That means mushers don’t have to waste valuable time toting water and bales of straw – time when their dogs could be resting.

It’s all right there for them when they pull in.

In other checkpoints, that can take two hours. In Takotna, it takes a cool 35 minutes.

“It is really what you have is a little oasis in the wilderness,” he said. 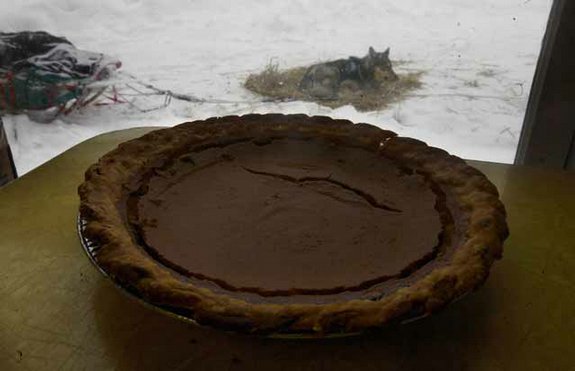 As Pete catches up with his sleep, he is in fine company. Over two dozen mushers from Jeff King, Rick Swenson, and Dee Dee Jonrowe, to Mike Williams Jr., Quinn Iten, and Pete Kaiser, Takotna is a who’s who of top mushing names.

He will be able to leave tomorrow at midday. He has 693 miles to Nome and the finish of this great adventure.

Unfortunately, Grant Fairbanks missed him as Pete went right on through to Takotna. He is making GREAT TIME!!!

We are still looking for anyone that might be able to get photos from the trail. So send them on in!! 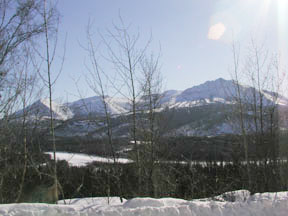 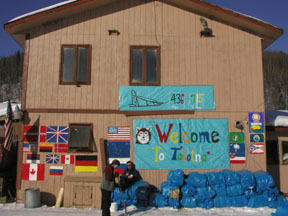 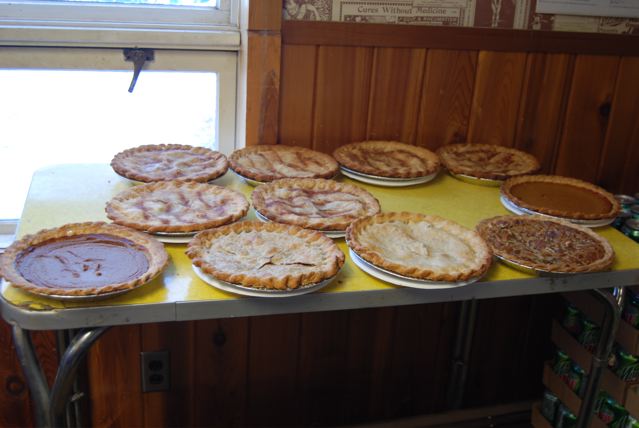 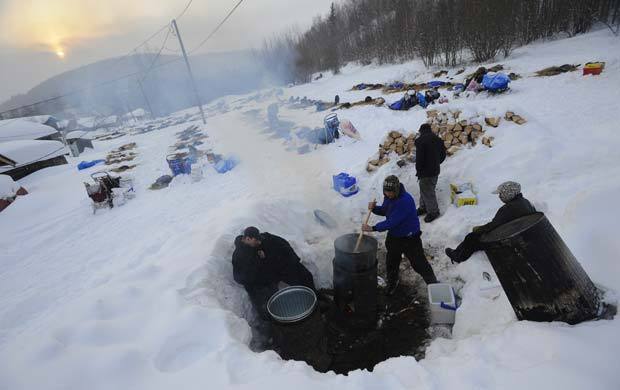 I just got an eMail from Pete’s Iditarider, Gail Carleton. She sent some photos in that have been posted to the Photo page.

She is going to send me details of her ride and her visit to our State.

I told her to send them right over and I would post them aay! (She said that in Canadian it is spelled, “eh”) 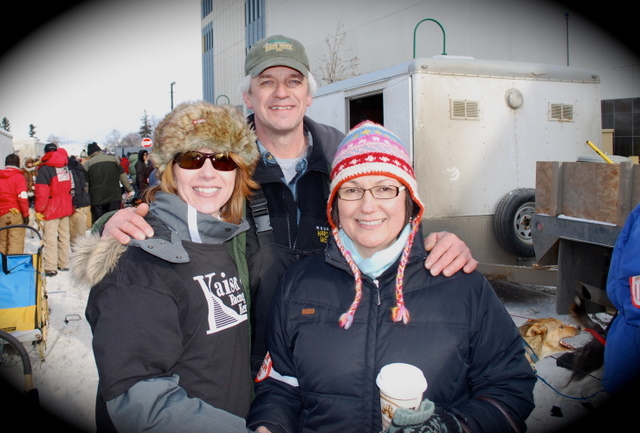 Pete is into Takotna at 11:56am with 13 dogs. A betting man might put money on a 24 hour layover at this checkpoint. Let’s see what happens!

Pete was into McGrath at 9:14am this morning, dropped 2 dogs, and returned to the trail at 9:26am. It took him 5hrs and 44 minutes for the stretch.

The trip to Takotna has been taking about 2 hours or so for the mushers. Takotna is 18 miles from McGrath. 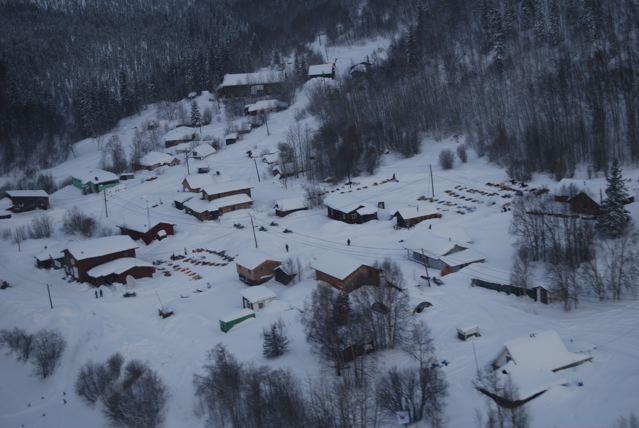 Mushers in front of  Pete have been making the trip from Nikolai to McGrath in 5 and a half to 6 hours or so. I expect Pete into McGrath by mid morning. Unfortunately the Insider GPS tracker for Pete is over 3 hours old, so I don’t have a good position report.

Pete left Nikolai at 3:30 after Mike Williams Jr who left at 1:32am and Quinn Iten who left at 2:00am. GPS Tracker shows Williams into McGrath, Iten in Nikolai, and Pete just out of Nikolai. If Pete is 2 hrs behind Williams, he is surely near McGrath in this reporter’s analysis.