Conditions are improving dramatically after the early Morning Blast.

Winds have died a bit, and visibility and ceilings are improving. Don’t get me wrong, it’s still a challenge out there, but let’s be optimistic together 🙂

Current Bethel Weather as of 9:30am AKDST:

As we wait and wonder and cross our fingers, hoping for improving weather, the near perfect storm approaches. The low pressure system moving up from the south has strengthened and jumped across the Alaska Peninsula into the Bering Sea. Normally, the system would decrease in strength as this happened, but with a very mild winter, the Bering Sea isn’t frozen and the system remains strong. Systems gain strength from the warmth of the water and create strong winds as they encounter cold winds from the interior. In this case weather forecasters are calling for very strong winds and blizzard conditions through this evening. A strong interior air mass is meeting this big system right smack over the race area.

Race organizers are undoubtedly concerned. A race is a huge orchestration of people, supplies, and transportation. The most important thing though is safety of the dogs, mushers, and fans. As conditions degrade, organizers are going to make a call based on all of those factors. It isn’t common, but races can change even their course based on trail and weather conditions. Last year in the middle of the Paul Johnson race based out of Unalakleet, the race cancelled the latter half of the race after poor weather. In that race, Pete and Team Kaiser won, but in reality it was a sprint race to the end from a close checkpoint.

If I was a betting man, I’d be laying odds that we will postpone today, but it’s all dependent on the storm and whether dog drops and officials will be able to get to the checkpoints. Word from the river is that there is a plowed truck trail, but in that case we still have poor visibilities to contend with.

Worse news is after this storm lies another tracking north as well, but that isn’t supposed to materialize until Monday or Tuesday.

Let’s cross our fingers and hope this storm moves west and we can get this show on the road!

At tonight’s meeting the mushers were cordial and keen on learning about the new rules and trail, but the Weather was on everyone’s mind. As of tonight, Kalskag and Tuluksak dog drop bags are still in Bethel due to the freezing rain and generally poor weather conditions. Presently a southern storm is bearing down on Southwest Alaska that might bring rain, snow, and strong winds to Race Day. Organizers will make a decision early tomorrow afternoon, but if planes don’t fly, postponement may be an option.

This has been a very unusual winter to date with warm weather and little snow. Pete took his teams and his handler to Nenana for a month, thanks to fellow musher and all around good guy, Aaron Burmeister, so the team has quite a few miles on them, but local teams that did not travel away have been looking for training days. I talked with Akiak Dash officials at the meeting and that race has been postponed from the traditional K300 weekend to later so teams have a bit more time to train.

This year the 6 hour rest rule has been changed. In the past, mushers could take one 6 hour layover in either Kalskag, Aniak, or Kalskag on the way down. This year the rules allow a musher to take the 6 hours in One hour increments in all of the three checkpoints. For example a musher may take 2 in Kalskag and then mush on to Aniak to take more time and then Kalskag to complete all of the 6 hours. The rules state that if a musher does not take an entire hour, no time is counted, so mushers will have to be careful not to leave early. For example if a musher arrives at 12:00 and leaves at 12:59, they are not credited with any layover time. This change will undoubtedly make the race much more exciting for the mushers and spectators alike. Recently Kalskag on the way up has been the stop of choice and mushers actually could rest up for the next long night. This change will also have the effect of removing sleep hours from the mushers.

Due to the conditions on the lower river recently, it was decided to use the Tuluksak “Back” Trail. This trail is used in Fall and Spring by upriver village folks traveling to Bethel when river conditions are poor. I spoke with Ross Boring, trail manager for the race, and he said the trail is in excellent shape. Due to the trees along the trail, it will be good going as long as the impending storm doesn’t wreak havok. This section of the trail can be confusing and Pete told me that he uses it often, but it took awhile for him to learn its tricks. Luckily the trail is marked with at least 10 stakes to the mile, so it should be fine, even for the rookies.

More in the morning as we see if the storm materializes. You can never be sure what’s going to parlay into reality when dealing with Alaskan Weather!! 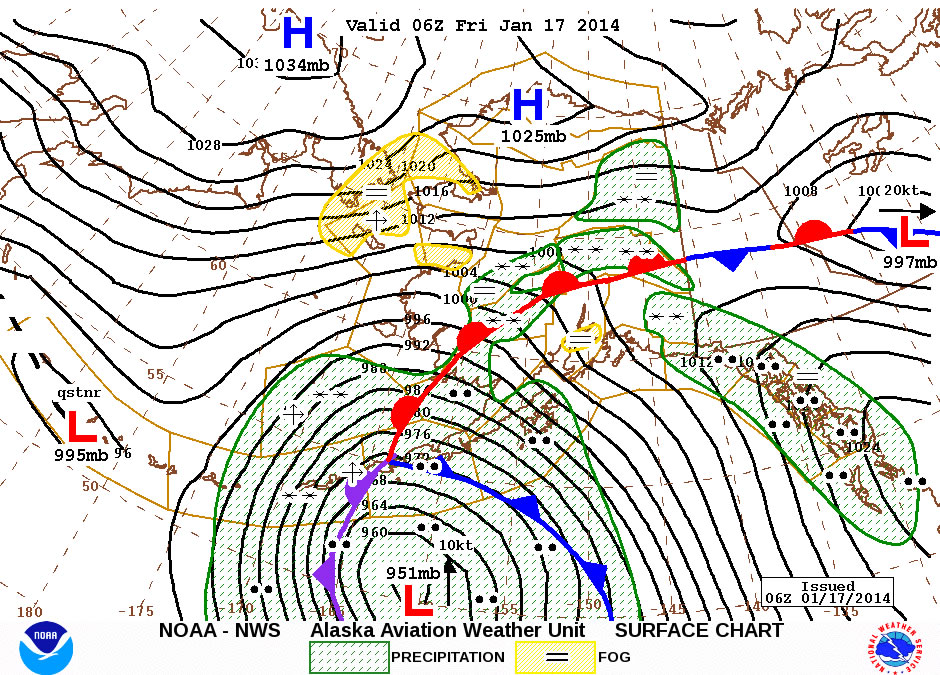 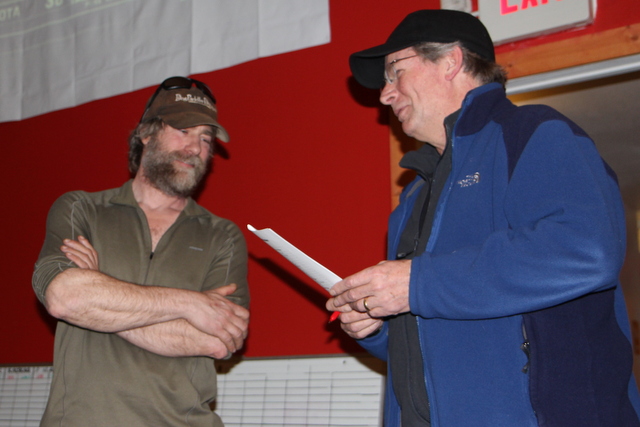 Pete Reuter with Will Peterson 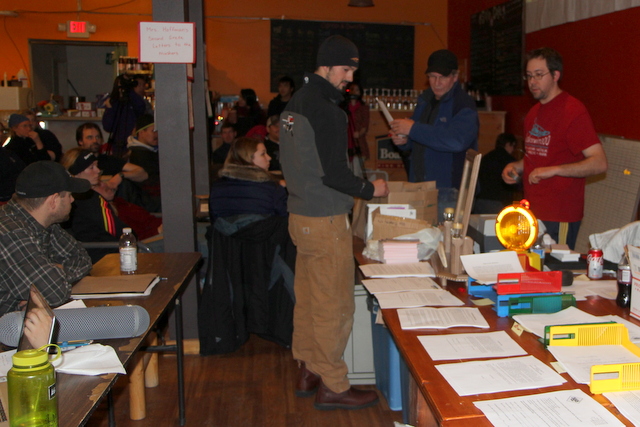 Pete Kaiser getting his Packet

Team Kaiser will be sporting two teams in the 2014 Kuskokwim 300. During the summer, Team Kaiser aquired a full time handler/musher, Pete Reuter.

As usual, the Kuskokwim 300 has attracted the top teams in Mushing. This year weather, new rules, and a new tough trail have combined to again bring excitement to the start line. (More on all of that soon!)

Peter Reuter chose Bib 6, while Pete will leave with the second Team in 21st position.