Congratulations to all of the Mushers! Thank you to all the Volunteers! This was another Fun Race!! 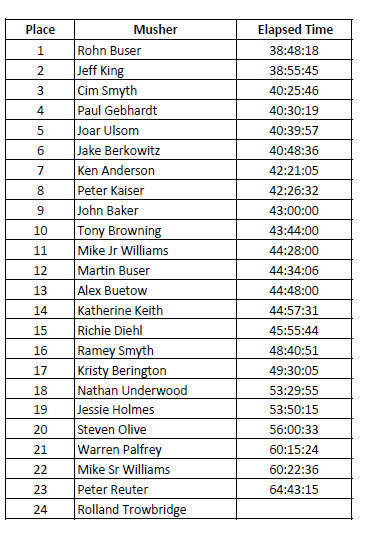 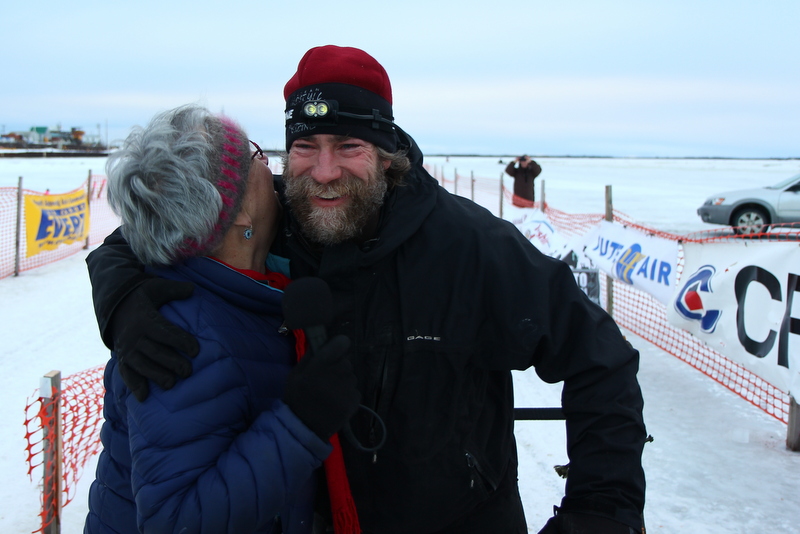 A good sized crowd of fans and well wishers gathered just before lunch to welcome Peter Reuter and the B-Team to the Finish line in Bethel. Among the folks gathered were other finishers including Richie Diehl, Jake Berkowitz, and of course our own Peter Kaiser. Peter was pretty enthusiastic, but very tired. I spoke with the mushers gathered as we watched Team Kaiser load up the sled and Team and some of the comments were very telling about this race. Jake said this course is way worse than anything on the road system. He’s been on some pretty tough trails including the Iditarod and the Yukon Quest and in his words, “the Kusko is WAY tougher. Hard to compare them.” I asked Richie Diehl to compare the water in this race to last year’s Iditarod conditions near the Iditarod Checkpoint that was also very wet and he his words included, “Wetter ,Deeper, Longer.”

We waited for Rolland Trowbridge of Nome to cross as the Red Lantern and close this chapter in K300 race history and he said, “The Iditarod should be a qualifier for this race, not the other way around.”

Given those comments, a big congratulations to Peter Reuter. The Team looked good and you made it all the way around. Good Job!

Pete Reuter is blazing down the trail towards the Finish Line. Look at the video below to see him catch Rolland Trowbridge from Nome who left 2 hours before he did. Theses doggies want to go HOME!! Expecting a finish in about an hour or about 11-11:30

When Team Kaiser Finishes, or Starts, there is a flurry of activity to bring the action to you, the web viewers. The video camera got knocked to the side a little bit, but it is a fun follow along.

Peter Reuter and the B Team were out of Tulksak this morning at just after 6:30. This will put them into the Finish Line at just before Lunch. Weather conditions had something to do with the decision to make the run in daylight at least in the lower end of the trail. We will all be ther to cheer Peter and the young team across the line and take home the 2014 Red Lantern.
Currently it is 37 degrees unbelievably in January! Winds are 15mph from the East Southeast at 15. Visibility is good.
Today’s Mushing Forecast-

.TODAY…SCATTERED SNOW AND RAIN SHOWERS SOUTH AND EAST OF
BETHEL…CHANGING TO MOSTLY RAIN BY THE AFTERNOON. FROM BETHEL
WEST…SNOW…POSSIBLY MIXED WITH RAIN AT TIMES IN THE AFTERNOON.
SNOW ACCUMULATION UP TO 1 INCH…MAINLY ALONG THE COAST. AREAS OF
BLOWING SNOW ALONG THE COAST. PATCHY FOG. HIGHS IN THE 30S. EAST WIND
15 TO 25 MPH

Pete R and the B Team arrived into Tuluksak at about half past 8 this evening. They are holding the Red Lantern for the Race at this point and will most likely take a nice long break so we can meet them in the morning.

UPDATE- I just gave Pete R a call and gave him a quick weather report. Looks like the race is ending just in time. Going to warm up and rain again. He sounded a bit tired, but he’ll be okay after some food and some sleep. Team is in fine shape. Sounds like he wants to leave in the early morning, so if that plan holds, let’s be sure to cheer him through the Finish Line. We will keep you posted!!

The B-Team Express had a bit of excitement just out of Kalskag this afternoon, but everything is back to normal and back on track.

Apparently the Team had other ideas and left Peter high and dry and lonesome as they ran up the trail without him. Luckily Peter was still in Cell Range to Kalskag and called in for help. Quick mobilization by some Kalskag volunteers (to be named later, but thanked Now – Quyana!!) found the Team up the trail sitting on their laurels wondering what to do next. They were all lined up and ready for Peter who had caught a ride with one of the volunteers.

No harm, no foul and the Team was ready to go. Peter on the other hand was a bit shaken by the experience, but after a reassuring call from Peter and the Race Committee, he’ll be ready to go after a short break.

I called Myron and asked him what the rule was and he said that it is perfectly legal to catch up with your team with a ride on a snowmachine. In fact this happens every few years.

In fact it happens to the best dog drivers– He related one race where the Great Rick Swenson lost his team. A bunch of mushers ahead of Rick on the trail all of a sudden saw a team go blazing past with no driver. “Hmmm” they thought. Then about 15 minutes later here comes Rick on the back of a snowmachine in hot pursuit. Rick caught up with the Team and rejoined the race- no worse for wear.

Peter will be fine, and this will go down as part of the storied K300 history. FUN for a Rookies first Race!!