Pete and the Team are in a 4 team race for 2nd place. Kaiser race fans will remember this same shootout last year on the Iditarod trail to Unalakleet. In that race there were 3 teams battling it out and today we have 4. That experience though will pay out as I am sure Pete will be a little less nervous and just run his race.
Team Kaiser appears to holding a solid 4th place- I found not to look to closely at the tracker, but to watch the recording feature that puts it all in a little movie. When you watch it this way you can see how the mushers are really stacking up.
King’s GPS shows him through Akiak on his way to an unbelievable 9th Victory. The Grandparents of these dogs ran this race to Championships!
KYUK is predicting a 11-Noon finish for King, but I would put it closer to 10-10:30. Once his team checks into Akiachak, we can compare Lewis Pavila’s time from yesterday and come up with a better guess.
Listen to the 8am Report:
[esplayer url=”http://kaiserracing.com/wp-content/uploads/2013/01/8a.mp3″ width=”400″ height=”25″]

Layover Over- Next Stop Finish Line! Pete and the Team out of Tuluksak!

After a 5 hour layover myself, I awoke to good news that Pete and the Team arrived into Tuluksak in 4th place just 6 minutes in front of Paul Gebhardt. The news of the night is Tony Browning– Wow! His enroute time was 11 minutes faster than Jeff King!

King is holding a commanding 1 hour lead at this point and is back out on the trail.

Pete and the Team will be able to leave Tuluksak at 7:02am, just 12 minutes behind Browning and only 5 minutes behind Rohn Buser. The race for 2nd is going to be one to watch for sure!

We’ll keep you posted, but the race is ramping up as we speak and the tracker is going to start lighting up any minute!

Lewis Pavila left Tuluksak at almost the identical time yesterday and arrived at 10:17am. If King is a bit faster we will be seeing a Finish at 10 or even before. Expect Pete and the Team at between 10:40-11am as well.

A few photos from the Tuluksak Checkpoint 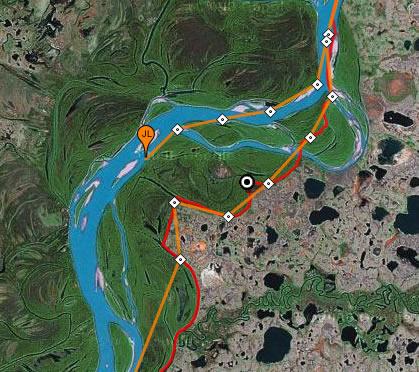 From the looks of the GPS, Joar Ulsom may have taken a turn for the worse. GPS shows him tracking on the Main River. We know all too well what happens when you are sleep deprived!

Jeff King is approaching Tuluksak and the 4 hour layover.

The four mushers now left in the second pack are making good progress as well and are now out of Bogus as well. We are headed to bed and will get up early to see how it all progressed. If Jeff gets into Tuluksak and 2am and Pete makes it by 3, we will have excitement in the morning as they head down the trail for the Finish Line.

See ya in the AM! 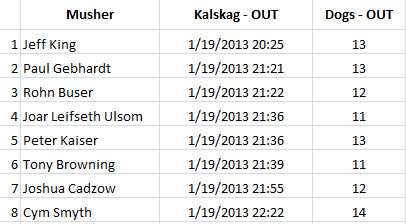 At this hour Jeff King approaches Bogus Creek and the camp area that the Bogus Creek 150 mushers used for their layover last night. Upriver from Jeff is the pack of four Gepbhardt, Buser, Browning, Ulsom, and our own Pete Kaiser. It is hard to take your eyes off the darn thing, but the GPS has the mushers swapping positions when I don’t think that is the case. I tend to think that the positions are pretty much like the mushers left Kalskag with the exception that I think Pete and the Team are in 4th place. I am thinking, after Will Peterson’s comments earlier this evening, that Rohn’s team may falter a bit and allow Pete to move up to third.

We really will know how it goes once the mushers arrive into Tuluksak. I just heard a report from Tuluksak, that getting water in Tuluksak is quite a challenge and requires 23 steps up the bank and then another 500 yards to the watering point. After little sleep and many hours on the back of a sled, I imagine that’s the last thing a musher wants to do in a race, but everyone has the same 23 steps I guess!

Weather this hour shows the bulk of the weather front has passed. Winds are from the Northeast at 22 with a Temperature of 22. So the wind is at their backs on the road back home.

I’d like to say that Pete and the Team have a home court advantage at this point, but Gepbhard, King, and Browning were mushing this course with Pete was still in gradeschool! Ulsom has maybe a disadvantage as he is the newcomer. Longtime mushing fans have seen King run down from Kalskag many times before and this proves to be no exception.

Pete and the Team have a battle ahead, if not with King, with those mushers around them, so the excitement isn’t over– Stay up with us as we watch him make his way to Tuluksak!

Jeff may be the King of the Kusko, but there are several mushers that aren’t going to just let it happen without a fight. King stopped for 18 minutes in Kalskag and is about an hour in front of the next group. The group right behind him didn’t waste much time either. Rohn Buser, Paul Gepbhardt, Joar Ulsom, and Tony Browning all stopped just long enough though, for Pete and the Team to show up and add their name to the group. In the 10pm KYUK report Peterson said that Pete’s team looked good and mentioned that it looked better than Rohn’s team. He predicted that the race was for second place and that Gepbhardt and Kaiser would be making a play along those lines. The others though, not to be outdone also left in a hurry.
Presently there is a five way shooting match to see who will be the one to move into second place. The GPS seems to make it exciting, but realistically they teams aren’t moving in and out of different places as much as it is the delay in the GPS. As the group moves down the trail we should expect to see it play out as the teams stretch out a bit. This has been quite a long run– one of the longest and some teams are going to be a bit more tired than others.
Maybe… The amazing thing is the group of mushers after this front group. A string of 7 mushers all arrived into Kalskag within minutes of each other. It just shows the level of competition and quality of this year’s field of mushers. Fun to watch to be sure!
Listen here to the 10pm report.
[esplayer url=”http://kaiserracing.com/wp-content/uploads/2013/01/10pmkyuk.mp3″ width=”400″ height=”25″]

Just heard the KYUK top of the hour report. Jeff King was into Kalskag about a little after 8pm, stayed 18 minutes and was back on the trail. Rohn Buser, who went from chased to chaser, told Will Peterson that it would take 12 mph runs to catch him. Will gave the impression that Rohn wasn’t going to give that sort of effort. As he was on the air, Joar Ulson, Tony Browning, and Paul Gepbhardt all arrived into Kalskag at the same time. Will said they were “All business” as King had been as they made their way through the checkpoint. I would assume they would get water, snack the dogs, and head back out on the trail.
Pete and Josh Cadzow are right in front of Kalskag and will be arriving into the checkpoint soon.
Winds are picking up in Bethel, though the snow seems to have subsided. Winds now will be on the Dogs and Musher’s back on the trail to Tuluksak.
Listen to the 9pm KYUK report[esplayer url=”http://kaiserracing.com/wp-content/uploads/2013/01/9pmkyukupdate.mp3″ width=”400″ height=”25″]