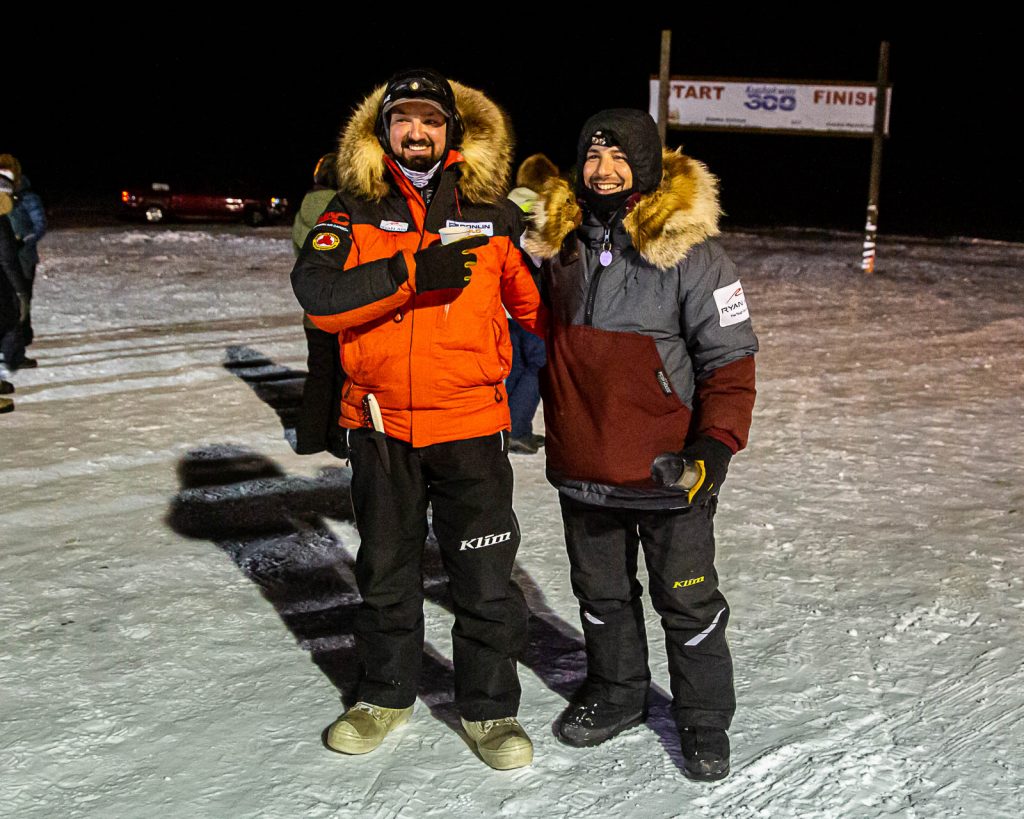 Pointing to the new Champ!

It was a great race any way you put it. Pete and the Team crossed the Finish Line at 7:21am to claim second place about 43 minutes behind his best friend Richie Diehl. “I couldn’t be happier for him,” said Pete of his friend and first Musher from one of the villages on the K300 race course to win the event. “It’s huge for his whole community and his family who’ve been involved with the race for so long.”

Pete had nothing but great things to say about the Team. It’s the first time he’s finished the K300 with all 12 dogs and was the only musher this year to do so. “It’s one of the best Teams I’ve driven,” he said.

Conditions on the trail were a little “punchy” or soft on the way up to Bogus Creek, but coming down the cooler temperatures had hardened the trail and made for perfect conditions. Richie had a faster race on the way up and Pete said they just couldn’t make up the time. “We could match him pretty much the same later on, but Richie ran such a nice race, we just couldn’t make up the time.”

The next challenge for Team Kaiser is to prep for Iditarod. Drop bags are due in Anchorage soon, so the focus at the dog yard will be on drop bags for checkpoints and all of the other logistics. With a scaled back race, no Ceremonial Start or public events, it is going to be a very different and in some ways better. As I’ve said before, mushers don’t necessarily like the limelight, so Covid distancing and getting right to the trail is right up their alley.

Again- A big hearty congratulations to Richie and all of the folks up in Aniak. They say it takes a community to raise a child? Well it takes one to raise a dog team as well!

Here are the photos from this morning’s Finish. Go Team Kaiser!

Pointing to the new Champ!