Two Sides of a Coin

Dogsled Racing is a fickle sport. One minute you are on top of the world, the next you are trying to salvage something to put the next section of the race together. It’s sometimes like a pendulum, things going good….then things going not so good.

The first 150 miles for Team Kaiser was just perfection in motion. Even with the challenges of the trail, arriving into Rainy Pass things were clicking along nicely.

150 or so more miles more down the trail and Pete is more than likely thinking that it’s a good thing Takotna and the 24 is next so he can recompose and put this thing back together. Dogs in heat in a race are always tough and Pete’s trail times show a Team not performing where we have seen them before. 24 hours of rest and focus with good warm beds will be just what they need. Get them settled down and focused and they will be ready to rock and roll on the trail again. Even with the trouble, though, his time from Mcgrath to Takotna within 10 minutes of the leader and 20 minutes of the fastest Team so far. Not so bad at all!

So many times in this race throughout the years Teams have faltered and not been able to continue. Team Kaiser is lucky in a lot of ways. Just tonight fellow musher Nicolas Petit decided enough was enough and pulled his Team from the race- too many little things stacked up and he decided it was best for his Team. So many races where just a freak thing and you’re out. The list of names is long and distinguished– King, Berkowitz, Jonrowe, and more. Freak storms, freak injuries, and just bad luck.

Pete and the Team can count their blessings as they have the opportunity to regroup and wait for another Team to have similar challenges because they will. With over 600 miles to go, it’s going to happen.

Arriving in 7th place into Takotna, Pete and the Team are only two hours off the leaders, but the 24 will have a differential for Start times built in and with the lowest bib number of all the leaders, Pete will have a longer break before he can return to the trail. The next group of Teams is about an hour back from Pete, but when the differential is calculated it will darn near be a mass start with a very large closely packed group leaving Takotna tomorrow evening.

For us, it’s break time! Anyone watching the tracker can finally rest their eyes for a bit before the real gluing happens! Haha! 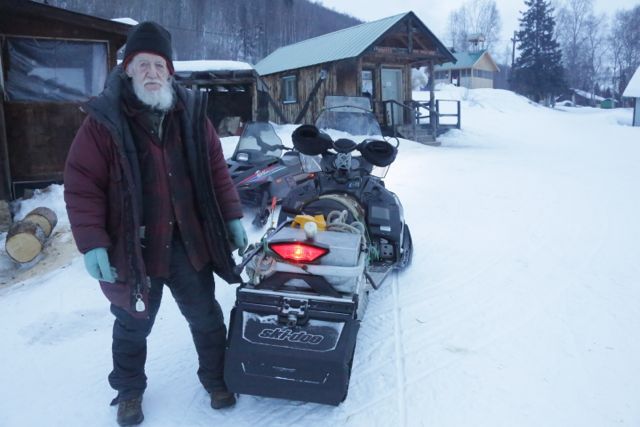 I always envy Mushers for the Takotna stop. Last year I was lucky enough to meet one of the historic people from the Iditarod. Dick Newton and his friend were eating lunch in Nome when I ran into them. Dick is the husband of Iditarod friend Jan, who passed away in 2012. She was famous for the pies I always write about. (For more about the race and Takotna and Dick and Jan Read this)

We chatted in the little restaurant in Nome about gold mining and the trail. He is well into his 80’s but had snowmachined in from Takotna. It was his last run he said, but I was amazed. It was a great lunch with the two legends. As we got up to pay, I told them I was buying them lunch. Of course they refused, but I insisted. “HAHAHA!” They laughed loudly. Dick is about deaf you see… “I TOLD YA! IF WE HUNG AROUND LONG ENOUGH SOMEONE WOULD BUY US LUNCH! HAHAHAHA!” It was a great moment and when I ran into them several times later that week it was like old home week and we laughed and laughed about it.

THAT is the Iditarod, folks. It’s the race, the challenges, the stories, and the people you meet along the trail.

Pete’s got a bit of work to do tonight to care for the dogs, snack and water them, and then find an open bed to crash out. It’s been a long couple days- Sleep well my friend!

Here’s a video from Pete’s first Iditarod at age 21 that puts it all into perspective. Some things have changed- A beard, a bit lower voice… But the wisdom of a young musher still speaks to us from years ago–