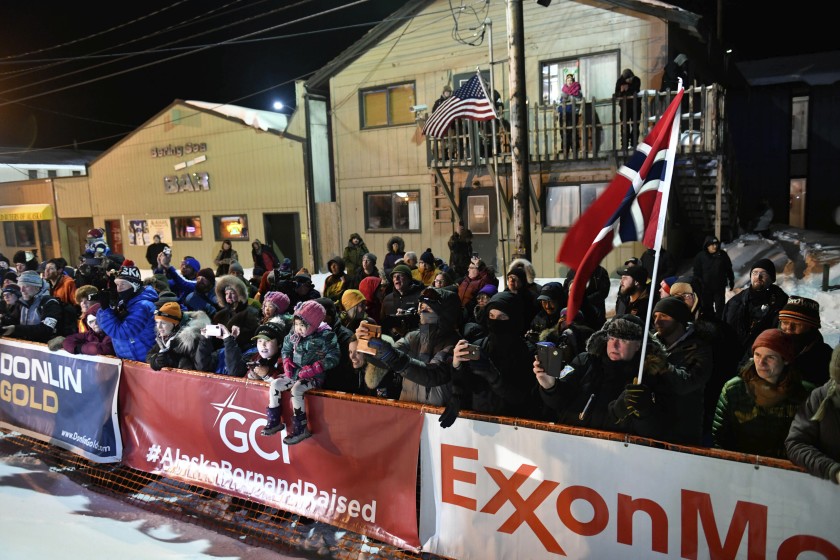 Mort and his Flag – LA Times!!

Mort, Nik Wikstrand’s Dad, traveled from Norway and has been with Team Kaiser since the first of the month. Nik had traveled with him to help Pete and the Team, but unfortunately was turned around by some paperwork snafu at the border. Mort, undaunted, kept going and has been helping and cheering on the Team since.

Ron and Mort headed up to Nome last night to cheer on Pete and the Team as they came into Nome and as luck would have it became almost an instant celebrity upon Thomas Waerner’s win last night.

Waerner hails from Norway as well and unfortunately they didn’t have a Norwegian flag for the finish. As word traveled to Mort of the situation he thought, “I wonder if I left my Norwegian flag here last year!” As they sat thinking about it Bob and Sherrie Madden wondered as well. They began a house-wide search and as the men were about to give up, Sherrie was convinced that it was there and lo and behold she found it!!

Mort and Ron headed down to the Finish Line and as Waerner crossed the line it was Mort and his Norwegian Flag in all of the photos! Kaiser Racing to the Rescue!!

Mort and his Flag!
Bookmark the permalink.