After their good break in Takotna, Pete and the Team left their little Vacay for the trail to Cripple Creek and the halfway point in the 2020 Iditarod.

Pete said yesterday that he felt a little like a kindergarten teacher dealing with the Team, but after a break and leaving another “problem child” in Takotna, the Team looks to be back in focus. Leaving with 11 in the Team might seem a little light in terms of numbers, but the Kuskokwim 300 Starts with 12, so I’m not worried at all. He will have to be a little more careful and keep a little closer track of the remaining dogs, but one “problem child” can cause all kinds of ruckus and it’s best to just set them aside for this race.

Looking at Pete’s trail time is very encouraging. Team Kaiser was 2nd fastest to Ophir and tied with the fastest to their halfway rest stop. It looks like several Teams are breaking the Takotna to Cripple run into two runs. Pete ran 5 hours 30 minutes to the spot where Jessie Royer and Richie Diehl were already camped out. Richie is having a fantastic race! With all the hoopla at the front and Cripple, those Teams are now on their 24 hour layover and realistically Jessie and Richie are leading the race at this point.

Pete is just out of the lead pack. Royer, Diehl, Burmeister, Waerner, Ulsom, and Redington are about two hours ahead.

Consider, though, that we are still almost 600 miles from Nome. A half a mile difference in trail speed will pay out over those miles. Also consider that Teams will take another 20 or so breaks between this point and the finish if not more. A 5 minute difference in rest can add up to a huge amount over that span. It is way early folks, so don’t count anyone out. I am looking at Mitch Seavey and Brent Sass as well as Wade Marrs and Matt Failor. All Teams are still in it.

I’m starting to get into Statistics mode. That’s all we really have right now as Teams run over the longest Checkpoint to Checkpoint stretch in the race. The 100 mile run is the longest in either the Southern or Northern route.

In terms of Statistics take a look at the improvement of Team Kaiser after the break. The pink is trail speed after the 24 and the dark blue is before. About a 2mph improvement. Considering Teams run in the 7-9mph range, that’s a dramatic improvement. 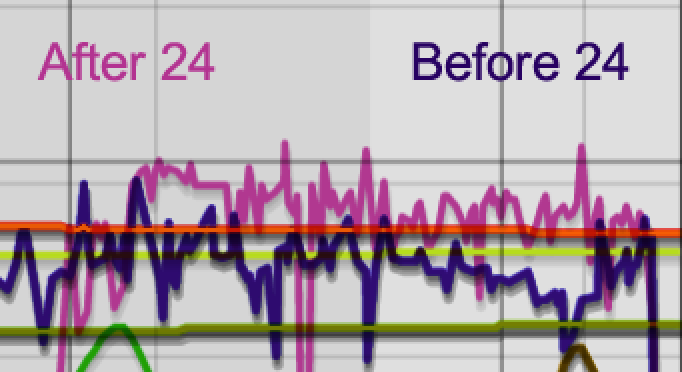 Also take a look at trail times into the camp spot and through Ophir. Pete and Ryan Redington are very similar in speeds and are really having great post layover performance from their Teams.

Realistically, this group are the true leaders of the race. Brent Sass may have gotten to Cripple first, but his trail times are about 40 minutes slower AND he took a 5 hour break in Ophir.

Here’s Pete leaving Takotna and a great discussion by Greg Heister and Bruce Lee in Cripple. Bruce describes the 24 and eating and trail condition. Check it out!

It’s a great day on the Iditarod Trail! Stay tuned as there is much more to come!