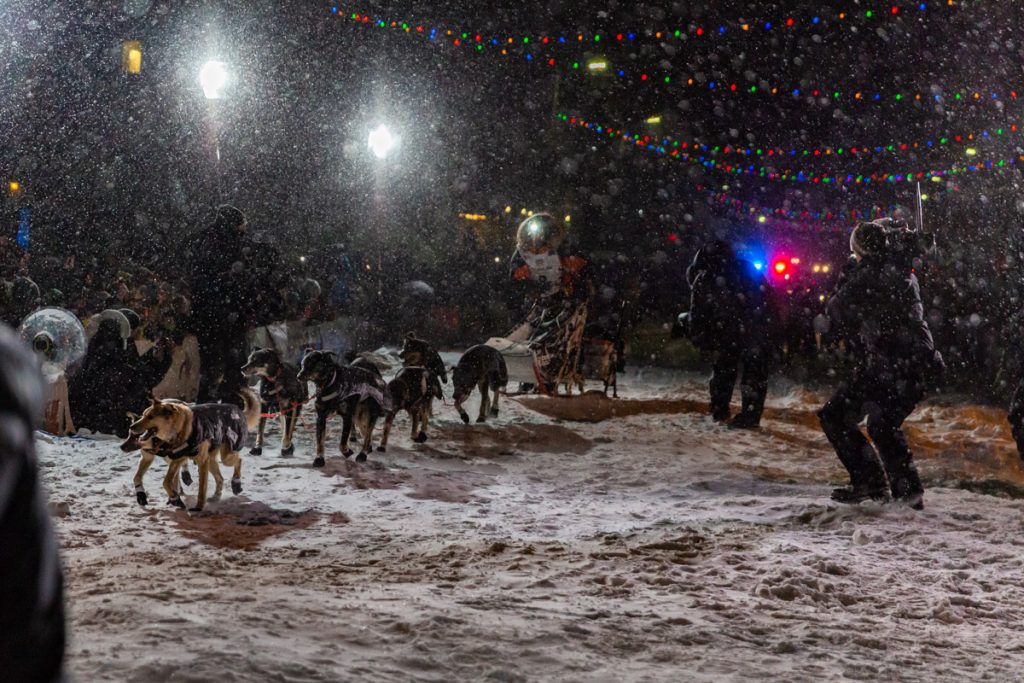 It has taken a couple of days for it to settle in.

How can you describe something that is so long in the making. So many have attempted to just finish this race and now after 10 years Pete has actually won it… The dream has has materialized and now is reality? Honestly it has taken a couple of days to digest and put words together to capture this momentous achievement.

It had all come down to 22 miles. We had all watched the tracker for so many days and now with only a few miles to go and we were watching a gaining Joar Leifseth-Ulsom. We were still nervous, still to careful to “jinx” what we were seeing by even mentioning the word “Win.” It was all on our minds, but no one dared even say it.

After leaving Safety the trail climbs a snowy hill before rounding Cape Nome. From here the musher can begin to see the glow of Nome. 7mph… 6mph… 4mph… “He’s slowing!!” Joar was gaining. Everyone was nervous. Bethany texted, “I’m so We had watched several Teams falter during the race. The history of the Iditarod has been won and lost several times in that last 22 mile stretch that leads to the Finish Line. Myron Angstman texted, “He’s got this.” It was too close for us to believe.

Pete and Richie both described the trail as a slogging trail of snow that, at times, had them pushing the sled downhill. “It was brutal and slow.” Yet Joar shared that same trail and he would have to contend with it as well. Pete was breaking trail which allowed Joar to gain on him ever so slowly. In the end, Joar would gain 30 minutes in the last 22 miles. Both men, fiercely competitive, would give their all to be first to the Finish Line. As Pete slowed through the snow, Joar would cut the lead. Then the trail would improve for Pete and it would be Joar’s turn for the snow. The lead would increase… 2 miles. 3 miles. “He’s got an 8.1” Ron, Pete’s Dad, was the most tense. For so many years we had sat in this very room in our host family, Bob Madden’s, living room and watched the tracker. Now Pete was in the lead and it still seemed surreal. So many memories, yet tonight would overshadow everything we could even imagine.

In Nome, at the Finish Line, the crowd gathered and grew. And grew. And grew. “This is the biggest crowd we’ve seen since Lance Mackey,” said Greg Heister from the Iditarod Insider to the live television crowd. Plane after plane had arrived into Nome as people from Bethel and around the State began to see that Pete had a chance to Win. In the days leading up to Tuesday night, almost 100 people just from Bethel were now at the Finish Line.

Pete Kaiser resonates with so many people across the State, but especially in Rural Alaska. So focused and unassuming, Pete is seen as a hometown hero to many that share his love for family, subsistence and the land. His dedication and success is shared with so many. His drive to help bring back the old ways of mushing is respected by young and old. When asked, later, what this meant to him as the first Yupik to win the race he said, “it’s important not only as a Yup’ik, but to all groups around rural Alaska.”

In his pre-race interview he said he works so hard because so many work so hard to help him. It was so evident a the Finish line. So many people from Bethel. Iditarod was very helpful and understanding. They have a set way of organizing the Finish Line. There are many things to accomplish in a very short time. Live TV, the presentation of the check, checkpoint checks, signing in and more. Having too many people in this area would have been a nightmare for organizers. They realized though that there were so many people that they had to accommodate such support. At the media briefing they approached me and we came to a compromise. They dedicated a section of the chute area to Bethel folks. Once some of the ceremony was completed they would allow “Bethel” into the area to see Pete in person.

The announcer began to introduce Pete to the crowd. “Peter Kaiser, 32, from Bethel, has been mushing dogs since he was a kid…” Veteran Kaiser fans know this intro by heart. But now it was on the biggest stage in dogsled mushing!!

Waiting in the chute we could see the police lights approaching the chute. It was snowing very hard and in the dark, even with the Christmas lights lining the street, we couldn’t see him there. Bethany, Aylee, and Ari stood under the arches along with the news and camera crews. The crowd was cheering so loud, “Pete-Pete-Pete!” It was a scene from a movie as he entered the chute out of the snow, all 8 dogs running with wagging tails. Pete was now running behind the sled. You could see the emotion as he jumped on the runners and thrust both fists to the sky! He had done it! It was true! HE WAS THE CHAMPION!!

Ron caught the Team as Pete ran up and grabbed and hugged Bethany and Aylee and Ari! He just held them hard as the crowd continued to cheer! He finally let them go and we could see his face wet with tears and sweat.

It was a moment we will never forget. It was one I will never forget. It just seemed like a dream! Honestly the whole thing. As I look back on it part of me is disappointed I held my camera to my eye. Just to stand there and watch and take it all in. We all experienced history! Dogsled racing has taken a downward turn of popularity, but here was a surge of people and cheering and emotion. As I look at how fast the finish happened, it seems like it is on fast forward. To me, time slowed down as we watched this awesome thing unfolding in front of our eyes. 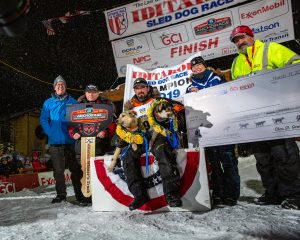 An Iditarod finish is like a wedding. There is a very closely choreographed script so that the Finish be broadcast live. There are many things to do. First was the official sled check and welcome to Nome. Then a presentation of the check, and then a brand new Dodge Truck. Then photos with the leaders and the traditional garland of roses.

“Pete – Pete – Pete” People were chanting and as race manager Mark Nordman escorted Pete out to present him to the crowd, Pete saw the Bethel group! He ran down and soon was in a group hug with his home crowd.

It was an incredible joyous moment to watch the cheering Bethel crowd with Pete in Nome. An unbelievable moment that was so important that this huge crowd wanted to be with him to share it.

Pete always says it– “I work so hard because so many people work so hard for me. I feel like it’s my responsibility to do my best.”

It goes both ways, Pete! We work so hard for you because we see you doing your best and the hard work has paid off…

Here are the photos!