Just got an eMail from Tillie, Pete’s sister who was at the exciting start this morning. She sent us a few photos to play with as well as this great report:

The idita-rider’s name was Gail, she was from Canada and we don’t know anything else about her, might possibly be on the iditarod website. These photos were taken on 4th and F street downtown before the ceremonial start. Pete is in great spirits and still seems pretty relaxed. He said he feels good and feels like everything is going smoothly so far. He said this part feels easy compared to all the get ready for the race. Tomorrow we will be going to watch the “real start” in Willow, which begins at 2 pm. He has to be at the Willow starting area by 11am tomorrow and probably wont start until about 4 pm since he is bib number 67. Pete and my Dad explained that the 8 mile ceremonial run through Anchorage to the Campell Creek area was quite the experience. They said there were people yelling and screaming from point A to point P, people yelling his name and cheering him on, high fives etc. When they came to Campbell Creek he and my Dad (Who was riding the second sled) had handfuls of cookies, candy, hotdogs etc. from all the fans! They really enjoyed it and Gail the Idita-rider did too. Tonight, he, my dad and the dogs are staying at Doug Dorland’s house which is in Palmer, so they will head out from there in the morning. 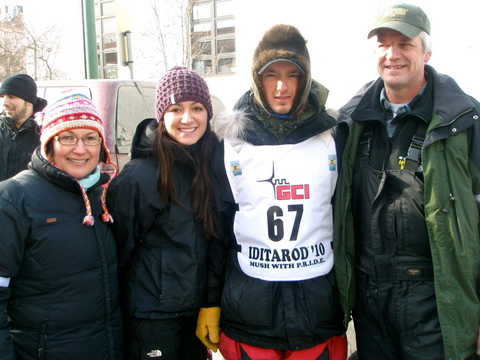 Photo at the Mushers Banquet on Thursday Evening. 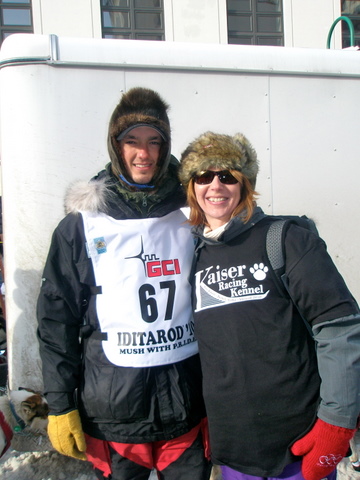